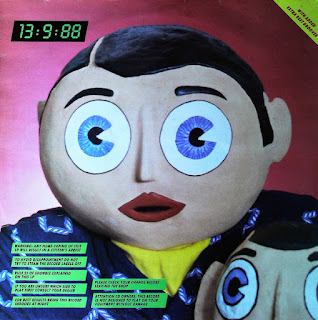 There ain't many demented children's entertainers who do cover versions of The Fall and Captain Beefheart,in fact you can count them on one extended middle finger.
Of course Frank Sidebottom is that entertainer;just one in a lengthy line of 'hip' northern English and Scottish muscians (He's Chris Sievey of the Freshies to repeat myself) who also moonlighted more successfully as comedians.
The art of marrying comedic song and dance with music is largely not to be recommended, but up north one has to have a sense of humour,especially if you live in somewhere like Rochdale in the 1980's. Even Mark E. Smith could have easily been a comedian;i had visions of him becoming the new Les Dawson later in life,but unfortunately he never made it too far past 60.
And of course let's not forget this is where Mrs Merton, aka Mrs Peter Hook of Joy Division (Caroline Aherne) got her big break.Going on to do the Award Winning "Mrs Merton Show",and The Award winning "Royal Family".....before succumbing to the rather less funny reality of cancer.
Nearly all of the above are dead!?
Bloody 'ell, they're dropping like bloody fly's!?
Tracklist:
A1 On The Train
A2 Blackpool Fool
A3 Tickets Please
A4 To The Beach
A5 Hit The North
A6 Hit The Arcades
A7 Hit Dick Turpin
A8 Frank Checks Into Auntie Edie's
A9 Mrs. Taylor
A10 Room With A View?
A11 Phone Conversation
A12 Off To The Funfair
A13 Mirror Man/Mirror Puppet
A14 Gimme Dat Harp, Little Frank
A15 Frank Hires A Boat
B1 Frank's Luxury Bachelor Penthouse Pad
B2 Debbie Greenwood
B3 Mrs. Merton
B4 Late Night Problems
B5 Me Great Big Floor Scrapbook
B6 Golden Mile
B7 Breakfast At Edie's
B8 Car And Punchline Trouble
B9 Go Away
B10 M.A.T.B.W.M.T.D.B. (Acts 1 & 2)
B11 Back At Edie's
B12 Gipsy Rose Sidebottom
B13 Very Very Big Special Case
DOWNLOAD HERE! you ungrateful bunch of front-bottoms you!

Tragically I don't recall MES ever saying anything about Frank but there *is* a FS/Fall connection because there was a regular FS strip in Oink, the Viz knock-off that Marc Riley contributed to, so I imagine MES would have affected a certain disdain.

Haha, talk about pointing out the bleeding obvious - all the InTape stuff was of course released on Riley's label!

Ok let's not drift from the topic. I was looking for ludicrous albums and artists similar to Kate Bush and Malvina Reynolds for my job when I found your blog and I found this guy and thought "what the fuck is that?" I mean, in my country (Brazil) we had blondie pop rock "singers" like Xuxa, Angélica and Eliana to idolize. They were the face of our 80s/90s childhood. So I see this guy with a fucking big head that reminds me of Turma da Monica parks and Jesus... this is brilliant and weird at the same time. I don't if your blog is a portal for another dimensional but I definately liked it XD

Well,if you think Kate Bush is ludicrous...which in some ways she IS...then you're gonna have a lot of fun trawling the vast depths of this blog. Other than that I have no knowledge of the artists you have mentioned. There is a documentary about Frank Sidebottom called "Being Frank" which will enlightened you somewhat......avoid the american movie "Frank" however, which is total horseshit.

I meant ludic XD OMG sorry for the bad English pal (and sorry Kate, you deserve better than that). Too late, I saw ten minutes of "Frank", couldn't watch more yet but "Fassbender Frank" gave me a total creep vibe, should I continue watching or is it really that bad?