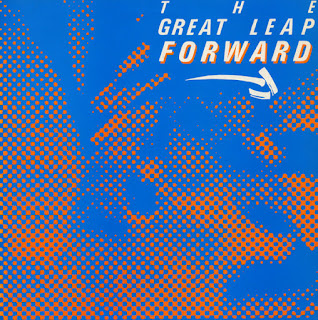 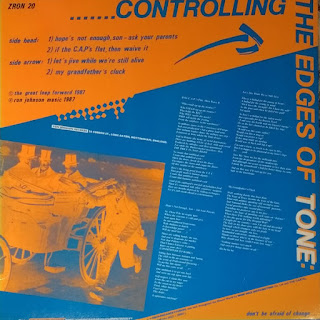 It all started to go WRONG with Ron Johnson Records, previously Thee perfect record Label, when bIG fLAME broke up,leaving us with Singer and Bassist Alan Brown's (a pop star's name if ever there wasn't one?) new poppier vehicle "The Great Leap Forward".
Firstly the band name rang alarm bells warning of trendy left wing alignment, to keep open ambitions to join the second coming of any potential "Red Wedge" tour with such like-minded righteous soap boxers as ex-tory Paul Weller's Style-less council, and the brain cell crushing awfulness that was,and sadly still is...Billy Bragg.....who incidentally had a song which went by the same name as Alan's new pinko pop chartbound flops.
As far as i was concerned,having eagerly purchased the debut EP "Controlling The Edges Of Sound", this was more the Great Leap Backwards from the cubist pop perfection of bIG fLAME.
Right-on lefty lyrics aside,the music is a kind of B-movie version of Haircut 100's bastard child with Josef K.....which sounds quite promising,does it not?.....but it didn't even achieve that.Quite disappointed I was.
Listening to it again,removed from such idealistic times....its not bad....it really does sound like Haircut 100 grafted on to everyone's favourite Kafka cloned Edinburgher's.
Amusingly dated references to the E.E.C.(if only it stayed like that instead of the unwieldy soopah state of today's EU?) and the Common agricultural policy (C.A.P.),which gave us Wine lakes,Butter mountains, and Grain surplus's bigger than the Sahara desert.What would we all give to have that kind of resource at hand today with this idiotic war going on?
Yep...let's Jive While We're Still Alive.....i'm currently tapping my foot to this,so there's still hope.
Tracklist:
Side Head:
A1 Hope's Not Enough, Son - Ask Your Parents 3:17
A2 If The C.A.P's Flat, Than Waive It 3:58
Side Arrow:
B1 Let's Jive While We're Still Alive 2:42
B2 My Grandfather's Cluck 4:31
DOWNLOAD while you're still alive HERE!
Posted by Jonny Zchivago at 12:14

Gotta agree, these guys weren't bad, but 80's Britain were flooded with bands that weren't bad. Nothing about them really stands out. Not weird enough for classic Ron Johnson and just a little too quirky for mainstream success. Thanks for putting this up.

Yeah, things got really moody at Ron Johnson's when that Sewer Zombies LP came out.....boy was that shite!...i think i posted it somewhere on the blog...with suitable review of course.

Humble request for future consideration, do you happen to have V/A "Head Over Ears (A Debris Compilation"? Its got the 1 track by Twang! I'm missing...
Cheers, M.

Mark L...sorry.not got it!? I apologise!

I can see the thinking behind putting out a Napalm Death/Extreme Noise Terror soundalike in 1988 as an easy way of getting some sales* - call the band something like Unspeakable Agony Of Existence, record about 40 tracks all going HOOOOOGGGHHH for a few seconds, and the job's done. But that Sewer Zombies album wasn't that kind of thing, it was just uninspired.

*The easiest sale Namedrop Records ever had was the last release, Cold War's "The Machinist" which was a very 1983 Theatre Of Hate-ish post-punk single. Not a bad record, though. With a bit of luck they could still be going today.

Yeah, i think the Sewer Zombies Lp was desperation on the part Of Ron Johnson,looking with envious eyes at the units that local rivals, Earache were shifting effortlessly. It was a sign that the only music styles that would survive in the 90's would be anything with Metal or Core (grunge was metal too,but in a checked shirt) in the job description or anything Clubby/Housey.and indie became,briefly, Madchester
I've got that Cold War single....i think i knew some trivia about that one somehow...its left my head for now.

yes, agreed, this one wasn't so great but I admit (now that I'm old enough) that I completely fell for them later when they went sort of full paul quinn mode and "who works the weather" (especially the AA version) is just great. no, I have no faint idea how this could be on ron johnson.


I remember them as being to bIG fLAME what Win were to the Fire Engines but I can see now that was a bit harsh as I think it's pretty good too!

I'm reminded more of the Wedding Present and the Scars trying to be danceable but they don't have the finesse to pull it off. Each song though contains a few 20 second stretches that sound utterly glorious in isolation. All that misapplied intelligence in the 80s! Oh well.