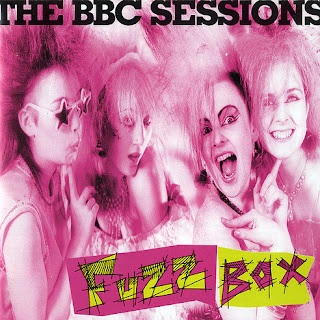 Without fail,the best moments in any bands history are the first things they do.
As a subscriber to the "First Thought Best Thought school of hard knocks",this quaint attempt at Folk-Art philosophy  should be carved on the stone tablets which emerged when the rock'n'roll Moses rose from the swamps with the Eleven Commandments of Rock clasped under his sweaty armpits.
Another rule scratched clumsily on these holy tablets is don't sign contracts with any entertainment industry conglomerate.
Sadly, "Fuzzbox"...as they came to be known after they signed a contract with an entertainment industry conglomerate..., didn't follow these simple rules,and rapidly became rubbish. Sadly not the first time this was to happen, mainly due to the vulgar pursuit of the mighty Dollah!.
Happily these girls were avid exponents of the "First Thought Best Thought"(or even better No thought No Thought!) process that pervades all great art,and were captured in their natural state,once again, by the BBC.As were The Slits a decade earlier. Nascent Fuzzbox were saved for posterity by the public service corporation of Great Britain,while Fuzzbox were still a new born phenomenon, and still called "We've Got a Fuzzbox and We're Gonna Use It".
I did type previously that all 21st century girl groups are shit in comparison.One was just paraphrasing/plagiarising a fellow blogger,honest guvn'r (Creepscanner)....strictly for shock effect mind.
The rather wonderful Wet Leg seem to be reviving the lost tradition of Girl groups who just wanna have a jolly good larf,and what are you gonna do about it? Hopefully they will curb the tide of dull post-hiphop nonsense that make up the majority of nominees for the joyless Mercury Music Prize 2022.You know what I mean,the Rap Singers.You've seen 'em on the Top Of The Pops..they used to go on there,you've seen 'em.The Rap singers.Y'know,The Rappers,Rap singers.Round the back of the multistory,...The Rap Singers.......
The tracks in these BBC sessions are frozen moments in time when these 2 minute symphonies were in their raw primal state,like Lionesses prowling the monochrome Savannah lands of Birmingham(UK).....dyed Pink of course.
Peel Session-Tracks 1 to 4: ℗ 1986 BBC. First transmitted 10/3/86
Janice Long Session-Tracks 5 to 9: ℗ 1986 BBC. First transmitted 10/4/86
Peel Session-Tracks 10 to 14: ℗ 1986 BBC. First transmitted 11/8/86
Janice Long Session-Tracks 15 to 18: ℗ 1987 BBC. First transmitted 12/1/87
Tracklist:
1 Aaarrrrggghhh!!! 2:23
2 Fever 2:25
3 Rules & Regulations 2:51
4 Justine 2:09
5 Aaarrrrggghhh!!! 2:25
6 Love Is The Slug 2:16
7 Hollow Girl 3:18
8 Console Me 1:33
9 Spirit In The Sky 3:03
10 You Got Me 3:43
11 Preconceptions 2:32
12 Jackie 2:35
13 She 4:02
14 Bohemian Rhapsody 5:18
15 Wait & See 2:11
16 Self 2:37
17 What's The Point 2:24
18 High Hopes 1:04
DOWNLOAD from the rich savannah lands of eighties pop HERE!
Posted by Jonny Zchivago at 15:51

Email ThisBlogThis!Share to TwitterShare to FacebookShare to Pinterest
Labels: 1986, 1987, Cherry Red, peel sessions, post-punk, UK, Vindaloo Records, We Got a Fuzzbox and We're Gonna Use it

I still think that performance in Scotland, where he (Stewart Lee) tells them that their National Hero, William Wallace, was gay, where he tells them that from all pedophiles the Scottish pedophiles are the worst, etc., etc, is his best performance, how he got out of there alive I'll never understand... Back in the 90's, working in the cafe all the street musicians (among with all the other freaks and crazies in Rotterdam) would hang out at our place (minus the South American pan flute types thank God), street musicians from all over the world, and making a decent living doing it, and the Scottish were always the craziest, they would go absolutely bonkers even if they were thinking the slightest negative thing about Scotland was said....

Indeed Henk, there's nothing worse than a scottish pedophile,other than a Scottish Nationalist who's a pedophile in his spare time.The only Nationalists that we aren't allowed to call Nazi's.
Yeah, I used to have a scottish girlfriend for 6 years or so...she was a nutter,always attacking women who mistakenly passed a glance in my general direction.
And the tiresome anti-english defensive rhetoric got on my fucking nerves.In this war, i wouldn't put it past the 'scotch' to ally with Russia because the English are too identified with NATO. Pissed up fools.

dear Bodhi, you take things too literally.
Of course there are exceptions, although its doubtful that TG's 1st Lp was "better" than the cassettes imho, and Go4's first album counts as their first works along with that fast product single,which in itself had a huge impact,and wasn't on EMI of course which scores plenty of cred points.....Pink Flag,invented Hardcore,there's not many albums that spawn a whole genre out there....and Chairs Missing invented Post-Punk....a unique band indeed.
But, by large, most pop groups first work is/are their best....they've had a lifetime to write it,yet the second lp usually suffers because of the reputation of the first. ATV's second Lp for me, is far superior to the first Lp...but most ATV fans would disagree,and think "Vibing Up The Senile Man" is the worst album ever made,....its all perspective and parallax innit?
In the case of Fuzzbox,my statement is 100% correct.In the case of a lot of groops,like the Beatles for example,they were really two groups.beatles before 1966 and the beatlesa after 1966....this also applies to bands like Wire for example...wire before 1981,and Wire after 1981. Like Go4's watermark was 1982,great before shit afterwards....its nor always down to one Lp.