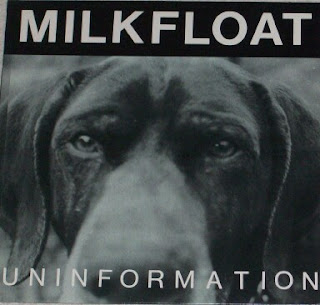 I'm knackered today, so i'm gonna have to stoop to that much over-used,and low, tactic of mild personal abuse because I just want to be liked really. Like John Robb of Ron Johnson wanna be's,or even Rob Johnson's, The Membranes,and the erect collared individual behind Vinyl Drip Records. Now, John likes, everything basically.You name it, he'll put a positive spin on it,very much like how everyone, including John, now love ABBA and ,of course, they are...Genius's(not). I made the mistake of clicking the 'like' button on Facebook,for his sycophantic music e-publication, 'Louder Than War' I think its called,or was that a Smiths odds and sods compilation for the Morrissey completist . Regularly i would receive articles about how fucking fantastic U2 are really, and how respect is due to a legion of geniuses who we all used to know were the enemy. Yeah, everything's great.....er...no it isn't. He did defend himself once by protesting to me that he was a 'Music Fan'...we all have our guilty secrets I suppose? ...yeah I like Flock Of Seagulls and Thin Lizzy, and one bets John Does too,itching to hit us with the 'Genius' bomb.The difference is that I know that Flock Of Seagulls are certainly NOT genius's...or was that obvious.
Then there are the endless brown-nosed celebrity interviews on YouTube that block up the pop u-bend,The John Robb interview,and the endless appearances on the Lorraine Show on morning TV when ever a pop star dies.....yeah,Ok....i'm jealous.....I've always wanted to meet Lorraine Kelly.
Gone are the days when the crowd at The Vortex club cheered when Danny Baker announced the Death of Elvis.
Normally I would suggest that one should not trust any male who wears his shirt collars upright,like Eric Cantona,although Eric did Kung-Fu kick a Crystal Palace supporter once,maybe aided in flight by those turned up Collars?...but generally it's not a good look,especially for a 60 year old.
The Membranes were/are pretty rubbish,never quite achieving cult status,despite busting a bloodvessel to be like their non-Trad Rock peers,such as Bogshed.....who also appears on Vinyl Drip,when they should have been on Ron Johnson,like Milkfloat should have been too.
One last gripe before i down my my Red Bull has to be thee most ill-advised pattern of Record Label  behavior,or even career self-destruction on record has to be Changing your band name mid race.Whosoever suggested that Death By Milkfloat should contract their moniker to just the incomprehensible two syllables of Milkfloat should be forced to read everything that John Robb has ever written about pop'n'roll,.... without remission.
Tracklist:
A1 Take Advice
A2 50 Second Sculpture
A3 Vagrancy
B1 Breakbone
B2 Too Much Feel
DOWNLOAD to be uniformed HERE!
Posted by Jonny Zchivago at 12:21

I remember when "Madchester" became a thing, and John Robb started writing pieces in Sounds about the new indie bands that were going to be pop stars, not like those drab old indie bands who struggled to third-division success like Inspiral Carpets. Always on the make.

Now in a better world Bogshed would have deluxe boxsets instead of the over exposed Fab Four. Never heard of Death By Milkfloat, but if there are comparable to Bogshed then I'm in. Oh, and the former head of Ron Johnson owes me money.

Louder than Words really is the ultimate bland-out - it's very much the 'indie' (so meaningless a term it could be bracketed by a million appostrophes until it collapses through the very fabric of the universe), I say, LTW is the ''''indie'''' equivalent of the Heritage Chart, which is so incredibly ghastly it is compulsory viewing. Never mind flippant 'so-bad-it's-good' glibberies, this is so awful it's fascinating, like a septic tank explosion. It's presented by Mike Read, which should tell you everything. Have a sick bowl handy. John Robb is '''punk'''s Mike Read in Munsters/Russ Abbott ted dress up. But then as you say, he has met Lorraine Kelly, and been in several bands and is a nice fellow, whereas I am the disquieted sad git spewing all his nowhere comment box diatribes to nobody. And I love Abba, always did, I always will. 'There is No enemy anywhere' (except for those cunts U2 (and that twat from Flock of Seagulls)) They were the Swedish TG as Gen readily observed. Love and fucking peace, no kidding

Every band needs a Twat in the ranks....and Gen,was the twat in TG,who wouldn't have a clue why ABBA are actually quite rubbish if someone explained to him why Aqua were in fact the Norwegian Psychick TV and vice-versa....were Aqua Norwegian?

"I remember Madchester"...good novel in there somewhere?...sadly i remember Madchester too....i saw a load of those awful groops..here's the worst Northside (yuk),Flowered Up (jeezuz), EMF (???),The MoonFlowers (Sheesh),..the Luvved Up Telescopes (unbelieveable!)..and of course the happy Tuesdays...which i was forcibly ejected from. The 90's were a blur for me...oh god...I saw Blur too!?...i blame other peoples' drugs.

@Anon...Bogshed WERE the fab four to me! If i won the lottery, a deluxe Box set would appear for a nice price.
Thre's a long comment from the chief st Ron Johnson on here somewhere, where he explains everything that went wrong....you will be at the bottom of a very long list of creditors which you will never receive recompense for due to bankruptcy......a company (Athena) did that to me once....we went down to the head office looking violent and left with the money,pronto....bastards.

Just looked at this week's Heritage Chart. What a strange mixture of artists! The Undertones, Chesney Hawkes, Micky Dolenz, the Scorpions, Matt Goss, the Lurkers....

OMG...just looked at this heritage chart thing....i feel ill. One of those things that invoke within persons of Hope feelings of "what's the Point?".Mike Read and John Robb are the same person.

I remember Madchester and liked some of the bands, but now I can't bear to listen to most of them. I do like the Monday's Bummed because everyone involved sounds completely out of it. But my worst musical sin was I brought a single by the Farm. God help me.

I must admit i didn't buy many of the ,madchester records, and can safely say The Farm were certainly NOT one of them...but I did have "Bummed"..which i liked, notably because of its total lack of fucking funky drummer beats...the next album i wanted to smash up as soon as i played it....most importantly, there will be no...zsro...madchester records appearing on this blog.