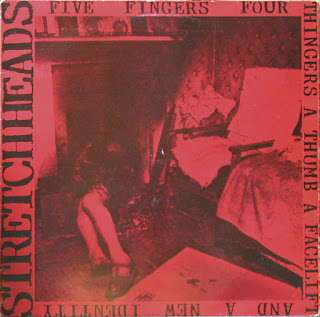 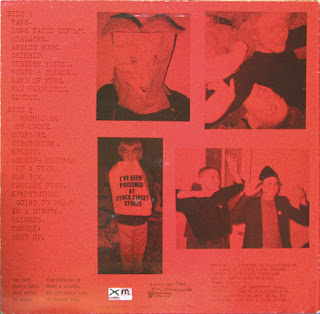 Stretchheads first proper Lp,with a few 30 second symphonies repeated in new form from the earlier cassette. Short songs were rather fashionable around 1988,epitomized by Napalm Death's "You Suffer", clocking in at one second...unless some smart alec adds reverb like on the Peel Session version,so that version was timed approaching the ten second barrier.
One must take issue whether a 20 second tune actually qualifies as an actual 'Song'?
Just playing a high speed riff with a lunatic repeating a phrase a few times, then stopping at a random moment around twenty seconds isn't really enough.I mean, what's stopping you playing the same riff for a whole hour  with the same sentence screamed over and over again (sounds good to me?) ,is that a different song?Or Not a song?
An Avant Garde statement on the disposable culture of the 20th and 21st century it may be,but Songs have to have some kind of structure to be called yer actual 'Song' innit?
Personally I'd like just one half hour tune, played in the classic Stretchheads' Beefheart meets Melt Banana in  Pycho-Ward Z at hyper-sonic speed stylee.....no unwelcome end of track and here's another one stuff;a bit like watching adverts i suppose...or another Avant-Garde Proto-Grind statement on the corporate west....I dunno do I?
Either way, there was certainly nothing like this bunch of nutters in 1988...at least outside of Japan.
The Front cover depicts a classic scene of Spontaneous Human Combustion,leaving just the extremities .......kinds sums up The Stretchheads most adequately indeed.
Tracklist:
1 Fans
2 Long Faced German
3 Headache
4 Asylum Suck
5 Skinrip
6 Yiddish Yoddle
7 Shape & Cleanse
8 Land Of Ming
9 Rex Perplexed
10 Semtex
11 I Should Be So Lucky
12 Confront
13 Sidatorium
14 Spleng
15 Archive Footage Of A Fish
16 Jaw Box
17 Chicken Fish
18 Everythings Going To Break In A Minute
19 Ilness
20 Cancer
21 Shut Up
DOWNLOAD a classic case of spontaneous musical combustion HERE!

There seems to be something odd about the upload - there are two versions of everything! Are they both the same?!

I guess they are both the same,i updated the file and both versions must have been added.Technology huh!?

One of those records that I listened to a couple of times, then offloaded at a secondhand recordshop. Interesting to hear if my ears are more attuned to this sort of nonsense these days.

I did the opposite - I kept this one and ditched the Blast First stuff! Probably a mistake.

Never heard the blast First stuff,as for me stretchheads are a one Lp groop.But probably wise to keep this one as its worth more dosh.

Although it doesn’t reach the half hour mark, their 23 Skinner 12" lasts a whopping eight (8) minutes... check it out!