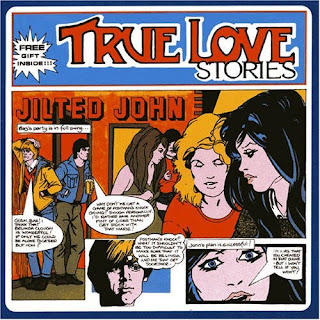 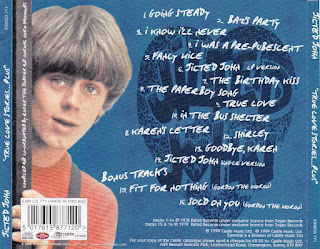 I remember sending me mum downtown to the record shop to get "Jilted John" by Jilted John on Rabid back in '78......but,it had SOLD OUT?!
This tchoon's time in the limelight coincided with the only visit logged to date of my Australian relatives from the suburbs of Sydney.......I'm now thinking of that fine song by The Fall, "Australians in Europe.....Peel Session version", that reignited my enthusiasm for MES and said group. These were absolutely NOT fans of The Saints,or any of those fine Oz Punk groups.Cousin Carl still wore the most horrible flared jeans,and liked stuff such as Fleetwood Mac and The Beatles(!?)So he was rather shocked at what was happening in the the whole of the UK, music wise. He accompanied me to the Record Shop where i bought that Raw Records Compilation "(Oh No)...it's More From Raw", which included such classic Punk Rock tchoons, as The beyond great Users' "Sick Of You", faux cockney's The killjoys, Some Chickens' manson inspired "Blood On The Wall",Hammersmith Gorillas etc.....not a bad track as far as i was concerned,but Carl was Horrified;later confiding in my mother that he felt Old and past it....he was 17.This of course only encouraged me to play it constantly,and at some stage i slipped Jilted John,on EMI, onto my turntable.This got an enthusiastic response from the female end of our antipodean relations.Cousin Clare was my age and secured herself a copy to take back to Wolongong to show off her new Punk single to her mates.
Describing this novelty single as "Punk" was pushing it a bit,but it had the sneery vocals,one chord guitar work,the group,....or the Rabid Records staff... looked a bit scruffy, but it did have its DIY roots,so i couldn't discourage the idea.This could have been by Johnny Rotten if he had a more privileged upbringing lived in Manchester and was nice.
I never bought, or even know of a Jilted John album until it got re-released in 1999.It's largely awful,and provided further evidence that this Graham Fellows project should have lasted for one single only;but, it does sound like a potential Lost-Teenage dream nostalgia musical that never was.....so maybe in the future?
Tracklist:

DOWNLOAD HERE! you sad excuse for a post-pubescent you!
Posted by Jonny Zchivago at 14:30

problem with the link.

Many thanks Jonny Zchivago for sharing this fun album....it is very much appreiated all the time and hard work that goes into your wonderful blog....Love & Peace my friend.
Stu

Very satisfying for a modest man ,like myself, to hear.
Peace and Love to you too stu.

I never heard this LP at the time either but I do remember Julie Burchill (!) giving it a rave review in the NME when this was a big deal on both counts.