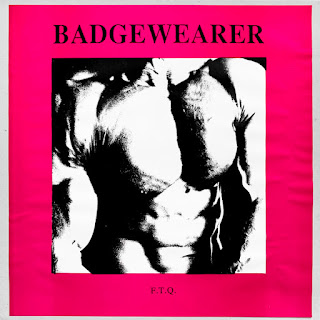 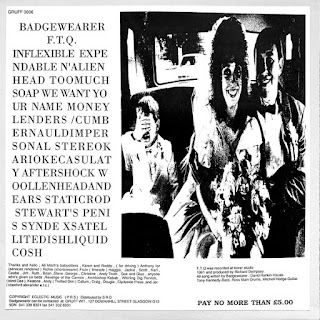 As much as I was oblivious during the 1990's, there did seem to have been a limited rise in interest in noisy avant-math rock types with their feet dangling in the limpid pools of both the Magic Band and Jesus Lizard camps....in Scotland?  Up until Brit-pop,the 90's were one endless party, unless you like Grunge culture,so didn't really have time to listen to a lot of this stuff,when just owning a new wave of Jazz record made me instantly allurable to the fairer sex in those happy pre-consent form carrying days.A Badgewearer album wouldn't cut the mustard. I suppose Post-Rock was the 90's too wasn't it? That was a largely interesting way to nurse a hangover,and a toll-free highway back to the music that started all this...Progressive Rock.
In many ways this math-punk noise was indeed progressive Punk Rock that, in hindsight, would have been rather popular in my household were it not for the many distractions on offer.
Badgewearer was another production job by former Stretchhead 'Richie',and it certainly has a few reference points that hark all the way back to the C-86 era,with its high-speed plectrum blur guitar attak a la Wedding Present, bIG fLAME etc,and admirably disjointed like a Glaswegian Shrub(s).
Very Ron Johnson.
Dunno what F.T.Q. means,but i'm guessing ,'Fuck The Queen',which would have appealed thirty years ago,but now the Queen's a nice little old lady, who could possibly dislike her? If you do you're a T.F.A......see next post. As,The Queen is the rightful heir to the Russian Throne,maybe 'Fuck Putin' is more appropriate? Sever the head of the snake and replace the poisonous dwarf,built up heels and all, with good Queen Liz?
Oh Yeah,this record has a song called "Rod Stewart's Penis"....i bet the plastic Scotsman himself never needed a consent form?...oops, a little bit of sick just appeared in my throat!
Tracklist:
A1 Inflexible Expendable
A2 N'Alien Head
A3 Too Much Soap
A4 We Want Your Name
A5 Moneylenders/Cumbernauld
A6 Impersonal Stereo
A7 Karioke Casualty
B1 Aftershock
B2 Woollenhead And Ears
B3 Static
B4 Rod Stewart's Penis
B5 Syndex
B6 Satellite Dish
B7 Liquid Cosh
DOWNLOAD and hail the rightful queen of Russia HERE!
Posted by Jonny Zchivago at 10:40