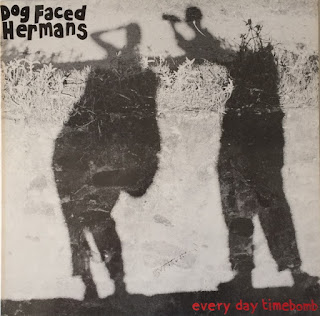 Sorry to mention John Robb again, but here's another Ron Johnson band wot got away,yet ended up with a release on Vinyl Drip late in the day;but at least Rob Johnson can put another of his products in one of his books,and make sure The Membranes are mentioned as the Trad Rock Traditionalist they wanted to be.
Being guilty of crimes against post-punk fashion,as in his 40 year long erect collars digression,it was a match made in Indie-rock Hell that Johnny,to his credit, could see past the frankly horrible Anarcho-Punk chic of the Dog Faced Hermans.They were, Scottish, after all.
Musically, The Hermans slotted in reasonably well with the pre-madchester Indie scene epitomised by Ron Johnson Records,which was fine ,as long as you did't see 'em. The liberal use of brass instruments give's one unpleasant images of previous and future scotch proto and post-indie evil,such as Pale Fountains and,OUCH!, Belle and Sebastian,that suggests music lessons as a child.....another Anarcho-Punk symptom displayed by the discerning Trustafarian in his angry years.
There's also an egregious,and downright unpleasant suggestion of an inclination towards some ginger dreadlocked Anarcho-Folk,weaponized in the 90's by the Levellers......thumb harps, junkyard percussion, didgeridoos, horrible,horrible,horrible.
Apart from all that...it's not bad.
Tracklist:
A1 New Shoots
A2 Scottish Block
A3 Binding System
A4 John Henry
B1 Beautiful
B2 Frock
B3 Live Action
DOWNLOAD why you should never give your child trumpet lessons HERE!

Thanks for this one. Sounds better than you suggest to me.
A year later Andy would move to Amsterdam and join fellow anarcho's The Ex, in which he plays till this very day..

Yes it is better than my review which tended to err on the side of image,which for me is just as important as the music.....anarcho-punk has been a long term target for me and i apologise...their first Lp "Human Fly" is rather good too.