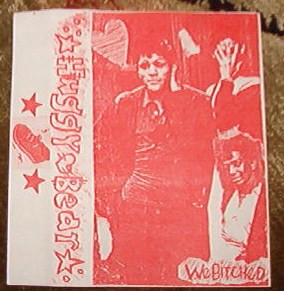 There were other decent acts on Wiiija Records of course,although not Scottish,(i've almost ran out of unpopular Scottish ones now), but we do have some posh student girls in their angry years from the mean streets of Brighton.....life's hard there. Staunchly feminist, even the boys in the group,but we know what male feminists are really after don't we boys?
Named after Huggy Bear,the light relief in Starsky and Hutch; this Huggy Bear were a mixture of angry ladies and useful modern gentlemen, who made a very noisy form of the Riot Grrrl trend imported into Rave-culture obsessed Britain on the coat-tails of Grunge. Yeah, they had heard Bikini Kill and decided to have a go at that aggressive ladies malarkey.
Also, this gives me a chance to relay my Huggy Bear from Starsky and Hutch story again.....yeah,basically i met him in a pub in Leicester, and he bought me a Guinness,while he stuck to zero alcohol Kalibur! When i asked him what is he doing in a Pub in Leicester he replied,"It's good to get out and meet the people".....you won't find many of them round here I said......he had virtually no clue what i was going on about.
Never got to meet the saucy femme's in Huggy Bear from Brighton however.They would have hated me anyway during my lost weekend period back in the 90's.
Apparently They were on "The Word", the so uber trendy that it made one wanna piss on one's telly box,late night modern magazine programme on Channel 4, and performed a song in front of a hand-picked audience of trendy fuckers. The angry ladies in the group took offence at some twin models or something sillier, and one of them bit the face of a producer during a heated argument......shock bleeding horror...and it was compared to that Sex Pistols' absurdly lame Grundy thing.However ,unlike The Pistols group,it didn't catapult them to the top of the pop charts...not for want of trying though.
I once thought I'd like to have a Riot Gurl girlfriend, but had trouble with faking an interest in Feminist philosophy,and the walking on eggshells conversations,and the special needs type "wild" behavior was a turn off,and rather boring. They just wanted to  be a housewife  with a Husband really.
This cassette ain't half bad actually.
A1 Can`t Kiss
A2 Into The Mission
A3 Coral Kill
A4 Sour Cream Stag
B1 Bumper Sticker (Version)
B2 Cherry Cherry
B3 Her Jazz
B3 T-Shirt Tucked In
B4 Blow Dry
B5 Hopscorch
DOWNLOAD future solicitors going ape HERE!

I had a riot girlfriend for some years--it was a predictably antagonistic relationship from the word go, and one which went on in some form or other for far too long a time, a mostly agonizing time, for all involved, and for a lot of different reasons, but I still think about that person far too often, and on the whole very highly of them, though not nearly as highly as I rate Huggy Bear. Thats why I gave this tape two grrl power fists WAY up (what I don't know, but easily elbow deep).