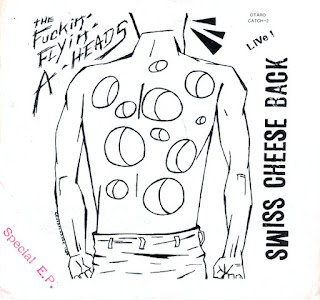 If you like your Rock'n'Fuckin'Roll disintegrating into a mass of crumbling notes of indistinguishable noise then you'll probably dig the sole record released in my lifetime by The Fuckin' Flyin' A-Heads!
They do one of theee classic songs,tunes,mess's, on the subject of watching television ever made.
My skewed interpretation of this trashcan symphony is that It tackles the tetchy subject of why the joys and pitfalls of Television (the object, not the trendy 'we invented punk and you didn't' band) are dismissed by condescending book readers,who seem to think that sitting in a comfy chair reading the scribblings of more intelligent people is actually doing something,and proves that they are obviously of superior intelligence than anyone who doesn't indulge in the written word? Some of us have jobs!
What's your hobby?....."I read a lot",they say,bathing in the light of cleverer people who actually did do something creative by writing this book,but as if they'd actually contributed something positive to the world rather than just filling up some spare time.
Me?....I watch Television, so i must be a lazy good fer nuthin' shit kicker, wasting my valuable time on Earth. Whereas, if i spent a month reading Tolstoy's war and peace i would have be doing what precisely?...Yep, sitting down,filling the void waiting to die,whereas at least watching TV is a social activity,yet achieves exactly the same nothing as the pastime these pretentious couch potatoes deem to be a superior form of time wasting to almost everything.
Informative,or thought provoking philosophical books, are of course excepted, whereas Novels,aka Stories, are around the same level as looking at an abstract impressionist painting for half an hour, or watching Tarkovsky's Solaris on DVD of an afternoon when you should be doing something more worthwhile. Listening to music however can always be done whilst one is doing something else;that includes, something creative, or vacuuming the carpet,among other things.
Punk Rock had an unhealthy obsession with TV,also. Slagging off TV Viewers, hinting that they should be getting out and doing something creative like...er....having Fun,and playing three chord dirges? No-one ever made any songs,or dirges, about suburban kids wasting creative time by reading John Paul Satre's "The Age Of Reason",or ruminate on Existentialism, instead of forming a crap band like The Fuckin' Flyin' A-Heads!
Listening to this I can't imagine any of this group have ever read anything more literary than a marvel comic.... once. Then again, being seen with a weighty tome in one's hand wasn't something that would have gone down well with your dumb-assed rock'n'roll image,leading to a severe piss-taking by yer mates.
There's a classic scene in the original mockumentary from the Comic Strip presents... series on channel 4 (1983), which you could have missed because you were too 'busy' reading "Gulag Archipelago". ....."The Bad News Tour"  at about 20:06 on this YouTube clip)..the late Rik Mayall, as Colin, the posh bass player in a terrible sub-Heavy Metal band (Bad News) is caught on the phone to his mum reeling off a list of library books to take back to the library.Noticing he was on camera,Colin changes from very non-metal subjects such as Blair's Origins Of Feudal Britain, to reeling off a list of cool bands to maintain his crumbling credibility.This was the UK's other Spinal Tap,as played by actual English persons....but made before yer actual Spinal Tap movie was released,and probably a far more accurate portrayal of life in a shit band in the UK.
Of course I'm only joking.Reading books is a good thing, just don't think it's anything superior to watching Television,surfing the internet, or wanking.That's all,'cus it's NOT!
Tracklist:

That was Neil the hippy from the young ones, hilarious! Never heard of that film.
Good to see you back in business, Mr Z!

And it was pre-Tap...so take that Yanks.

GRRREAT single, this, thanks! Tap is actually a lot better than Bad News, but I love em both really, especially More Bad News with Colin the estate agent and their being signed to Frilly Pink records.