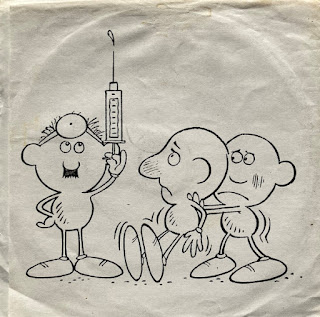 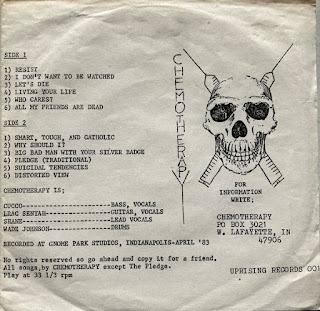 There are certain epoch's in American musical history when they don't make dumb assed rock bollocks for morons and rednecks  and branch out into making something else as dumb-assed but accidentally good.
One of these 'epoch's' in question, would have to be the US Hardcore scene between 1981 and 1983,before it all just became homoerotic Punk Speed Metal. Black Flag were shit of course,but there were legions of kids like "Chemotherapy" who made it their own,and didn't once think about shifting units.
The 'top' Hardcore bands became 'punk' equivalents of Yes,and ELP, in 1975,playing with such impossibly muso intensity,that the kids couldn't play it. The worst bits was sacred cow stuff like The Bad Fucking Brains.....I expect the race hate highwayman to jump out from the bushes to accuse me of genocide,but....come on, or cum onnnnn,...that reggae shit...what was that all about? If I wanted to listen to Reggae I'd put a reggae album on me turntable wouldn't I?
I remember Moby saying the greatest Hardcore album ever was the Bad Brains...then he added, except for the reggae parts? Too right,and then we find out the Bad Brains were originally a Jazz Fusion band called "Mind Power"!?...a bunch of Muso's looking for a market it seems? And all that Jah rastafari codswallop? They were religious for fuck's sake!? Albeit a really made up religion where no whites get to go to heaven,and only slightly less silly than Mormonism....where no whites get to go to Heaven either,because it's MADE UP! In fact they're all made up and no-one no matter where they were born gets to go to heaven, which almost certainly does not and cannot exist.
Chemotherapy, however, were just a bunch of school kids from Indiana...a place that would still lynch anyone who listened to Genesis as an atheist,and burn Beatles records if there were any left...who didn't have a ready made audience,and didn't have access to half-decent recording facilities.
They made one of the greatest Hardcore EP's ,a millions miles away from Roir tapes and their Bad Brains pets.They may have been white kids,but such documentation of apathetic acceptance of a life of wage slavery and pointlessness has hardly ever been created,other than the hundreds of of other similar exercises that have been unearthed since the beginning of Rock tyme. I don't feel this angst in Bad Brains stuff,they looked far too healthy.

A1 Resist
A2 I Don't Want To Be Watched
A3 Let's Die
A4 Living Your Life
A5 Who Cares?
A6 All My Friends Are Dead
B1 Smart, Tough And Catholic
B2 Why Should I?
B3 Big Bad Man With Your Silver Badge
B4 Pledge
B5 Suicidal Tendencies
B6 Distorted View
DOWNLOAD and blast the cancer of listenable pop HERE!
Posted by Jonny Zchivago at 18:49

Email ThisBlogThis!Share to TwitterShare to FacebookShare to Pinterest
Labels: 1983, Chemotherapy, US Hardcore, USA