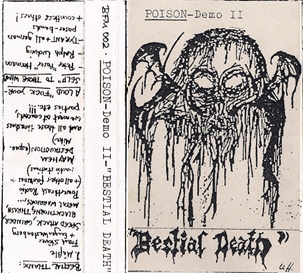 Oh my God......sorry all you pale blue-veined metallic youths...I mean Oh My God of Evil,the great Satan and all his fantastic demon mates...I fall to my knees in thanks that you are but a very early prototype for a system of control...and a majority of the modern Planet still, STILL(?) falls for it.
Despite hardly ever being mentioned in that toilet fiction best seller by authors unknown, "The Bible", your influence still makes the god fearing  among us fear the concept of 'evil'...even the very intelligent among us are sucked into this ludicrous experiment of mass hysteria.That is far more frightening than any fictional devil,mainly because its fucking real!
The main tripping point for Death Metal,or just plain satanism is ,that if Satan exists then so does God,or Jehova, or Alan.....please don't kill me, I meant Allah!. Therefore,you are condemning yourself to eternal torture because you didn't waste your life grovelling for forgiveness for sins that ,apparently, Jesus Christ had already absolved us all for when he ,allegedly, provided the perverted image of himself nailed to a cross to remind us all.Although there are no photographs to prove it, so we'll just have to take the word of a bunch of madmen, who seem to have an exclusive hotline to the main office of the Almighty God above,and so can inform us of which confused nonsense this evasive deity wants us to know.
So, Death Metal bands are either comfortable in the knowledge that neither God, Nor, Satan, almost certainly do NOT exist ,and are just having a bit of fun, or they are totally stupid,worshiping the wrong side. I've heard that Satan, doesn't pull the punches when it comes to torture and eternity...even though it says fuck all about it in the Bible.However, one must say it's great fun annoying, and better still, frightening the shit out of dumbass believers by pretending to worship Satan,Lucifer, Beelzebub ,or whatever other stupid fucking name they give this ghost.
Now back to the slightly more logical world of terribly bad recordings of Death Metal band Poison, from Germany.
If it could be possible, Poison's second Demo, has an even higher rating on the Shit-Fi scale than the first. This one seems to have been recorded in a shoebox,with the drums outside in the car park,but the vocalist is the same room as you, spraying large clumps of sputum in your ear.The lyrics of which are unlikely to be sophisticated ruminations on the human condition.....well...either that or about death,evil and the Devil.It's truly bizarre stuff,and naturally its also very silly, but there's nothing else that sounds quite like it.
Tracklist:

@ Jonny -- You may be wondering how I managed to "stumble upon" a comment directed towards me in June of this year from a post you had made over _4 years ago_. (Re: that Hammill/Lydon comment). I honestly don't know. Also, there's probably better things to be "wondering" about and I've probably got better things to do than reviewing comments I had made 4+ years ago. Seriously though, a massive VDGG box set thingie just came out and it got me to scouring the internets for commentary upon Nic pOtter's bass sound on VDG's Vital. Surprisingly, there's not a whole lot out there. How can that be?! I mean, it's a pretty unique and bad-ass sound, yeah? At the moment, I'm listening to these new stereo remixes of the four "classic" VDGG albums--H to He to Still Life. And they're not great, frankly. Kind of annoying. Hammill's vocals (on the remixes) have a very "punch-in"ey quality and dude doesn't seem to care much for David Jackson. At least I didn't pay for it.