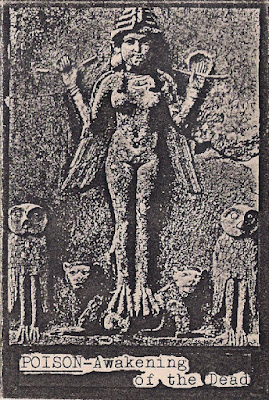 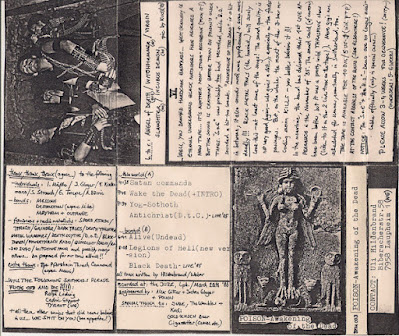 By Demo,or Demon,number III, Poison have finally worked out how to operate a mixer,and we can hear all the instruments. Now I can reveal that the Bass Player ,called...don't laugh....Incubus Demon......(muffled giggle)....has lifted the one size fits all Bass riffage from Saxon,whose every song used a one note E-string drone for virtually every tune they did.....just like Lemmy,and probably the four stringed Satan who was in Venom too.....i'm guessing here as I'm not too familiar with Venom's seminal works.
Poison's guitar sound is ruthless as always,the vocals are customarily indecipherable ,but they still retain that special live in the replica Gas Chamber at Auschwitz ambiance. If you ever visit that Nazi Disneyland for ghouls and fools (Don't),test out the acoustics of the Gas Chamber with the impertinent question "Is this the original Gas Chamber or is it a post war replica?"...and count the evil looks cast in your direction......names will be taken.
Metal ,in general, is a difficult thing to admit liking. Saying "I'm into Metal" is tantamount to admitting you're a Virgin,or have no Friends,or were bullied at school. On an anthropological note, I did note that the Bully's were usually Soul fans, and the Bullied were invariably followers of the infinite varieties of Heavy metal. Mirroring the Mods and Rockers' running battles of the 1960's. Punks, of course, were a mixture of the two camps,so generally got left alone,unless Skinheads were in the vicinity....this is why 'Oi' came into existence.
I did get discovered with a Devo album by a gang of Soul-Boys one time,which didn't end well,for me or the Devo LP. Not understanding the appeal of Soul music myself, i guess i lean towards the Metal end of the Pop spectrum,but this doesn't mean I'm a Virgin or totally friendless....although I'm working on that one....because i'm reformed Punk Rocker I suppose? Nowadays I can't stand Punks either.
"Never join a club that would have you as a Member" is my family motto courtesy of Karl Marx's smarter brother....Groucho.
Tracklist:

DOWNLOAD some german poison live at auschwitz HERE!
Posted by Jonny Zchivago at 09:09

Confession: Sometimes - eg if I'm away from a computer - I just look on youtube for the things you post (which ought to be encouraging in the sense that you can't always guage interest in terms of downloads?) and that's what I did with this one. Anyway, some fun comments on there, eg: