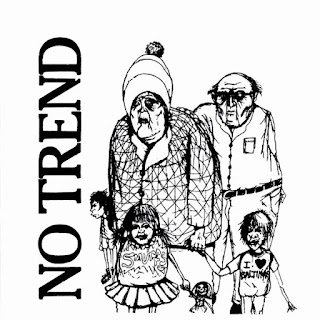 There comes a time in each man's life when he encounters a group so good on all levels that they are beyond critical praise.Even rarer is one that doesn't 'suck' after their first single encounter with fame in their own lunchtimes. The only other example I can only think of  is The Fall,who,even when they were in their not so good period, still ticked all the boxes. No Trend could never match the longevity and consistency of  Mark Edwards tunesmiths,but for a moment, while the USA were becoming either Sonic Youth or The Dead Kennedys,they managed to make nihilistic musical statements on the unpopular subject of the sheer torture of the human condition on a doomed planet. Don't you know we're all gonna die and there's nothing you can do about it? There's No trend and there's No solution.
Well maybe they ain't that Good in fact,things get a bit moody from the 'difficult second album' going onward,but they were always a different band,with almost as meny ex-members as The Fall.However the first album and single were just as perfect as the Martin Bramah Fall epoch.
Of course I'm talking bollocks,but apparently there's an existential crisis going on?
If we were to apply a 'Trend' to No Trend's american rock at the end of the universe it would no doubt be "Post-Hardcore". It's american Rock as seen through  an occluded lens in a bucket full of an alcoholic's blood infused piss.You can clean your windows with it and stare through the stains to watch your neighbours drive their SUV a hundred yards to the mall to buy more stuff.
We're pushing our way to the front of the moshpit in the same way one could imagine a disabled Jew pushing in to be first in the gas chamber......(and before any Anti-vaxx,Trump voter,conspiracy nut flat-earther raises issues about Gas Chambers and climate change stats...firstly fuck off, and secondly, I'm just using Gas Chambers as an analogy for climate change inaction 'tis all)....but the Gas Chamber's already full and we're all singing No Trend's "Too Many Humans" (from their first LP) as a bunch of drugged up rednecks close the air-tight door......then warm,fluoridated but mildly radioactive water gushes out of the shower heads and we drown.At least your corpse will have strong teeth.
Altogether now.....
"Too many fucking humans,
You breed like rats,
And you're no fucking better! (Repeat until end)"
Hmmmm,maybe they should have said 'and WE'RE no fucking better'...a tad less superior and accusatory in tone than the finger pointing 'You're' That they opted for in the extensive lyrics published above?No-one is innocent.
Tracklist:

A1 Mass Sterilization Caused By Venereal Disease
A2 Cancer
A3 Die
B1 Teen Love
B2 Let's Go Crazy
DOWNLOAD or be too late for the no trend HERE!
Posted by Jonny Zchivago at 12:42

My inner teen loves this.
So does my inner adult.
Is that wrong??

That is soooo wrong.
Your inner teen should be slaying your inner adult with illogic and hubris.
And that makes it right!?

You fuck off you shitdick !

I hope Bill Gates Chem trails you and your fucking redneck bumchum lover.

These guys have aged better than most. Yer last comment reminds of of a band who's music I've pretty much forgotten named Evan Worse. Of course you had to stick around to see if that was true, Must not have been that awful.

Have you read Triage by Leonard Lewin? It's a hoot.

@ Kamandi ...nOT READ Triage...but have googled it and it seems to appeal to my sensibilities somewhat.