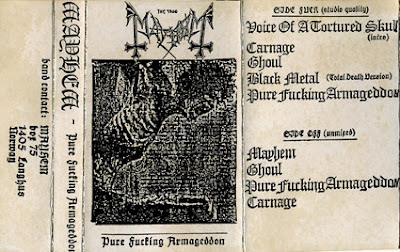 These Notorious Norwegian metallers were very naughty boys indeed. One could accuse them of taking it all rather too seriously, perhaps even taking it all a tad too far maybe? They nicked their name from Motorhead-a-likes and supposed Black Metal band numero uno,the UK's very own, Venom.So that kinda categorises them I guess?
Some call this Back Metal,or even Death Metal? I dunno,but because they dress like Metal kids with make-up on,does that make this metal? Its got some riffage going on,and hints of growly vocals,singing about ghosties,violence,and pure fucking armageddon.....stuff like that. So I suppose the pure derivative silliness of it all qualifies them as 'Metal'.It just sounds like a bunch of mad noise to me,like an avant-garde interpretation of Metal whith large chunks edited out,the opposite end of Sun(((((0. Basically I dunno what I'm talking about,but I like it...(sing).."Mamaaaa, it's only Black Metal but I like it,I Like It Yes I doooo".
Of course the back story to this band is that some of them actually wanted to back up the rhetoric with actions.So if one of the mis-led young fools said I'm gonna actually live out the the Rock'n'Roll endgame of comitting suicide on stage I'm actually gonna do it.
It all started to go wrong with the addition of new vocalist and grade 'A' nutjob, Per Yngve Ohlin,aka "Dead",who had a nasty habit of cutting himself with hunting knives and broken glass on stage.A cry for help perhaps?
The obviously mentalist Dead,did infact end his own life by slashing his wrists and sucking on a shotgun,but he didn't do it onstage,the sell-out! Here's a short extract from his suicide note:
"Excuse all the blood.Nobody will ever understand this, but as a sort of explanation, I am not human, this is only a dream and soon I will awake".......whoops!....Were still waiting for him to wake up thirty years later.
Then the story gets dafter with  the fatal stabbing of founder member,guitarist Aarseth (Euronymous) by Bassist Varg Vikernes,who was only in the band for a year,but seemed determined to make a bigger splash in the Mayhem legends swimming pool.Varg was also responsible for a string of church arsons for which he was convicted in court.Along with the small matter of first degree murder,the punishment for which was to spend a lenient 21 years or so in the unbridled opulence of those famous Norwegian Prison Cells/luxury flats(although he only served 16 granted parole in 2009!?).Surprisingly,and very un-Norwegian he also had to leave the band,which was then reduced to a duo, temporarily,due to murder,suicide and imprisonment.Incredibly replacements for the vacant positions were not hard to find,not that I would recommend anyone should volunteer for such a poisoned chalice i may add.And they are still churning out the filth today;although they've given up murdering each other,toying with Nazi politics and messing about with shotguns.At least for the present.
Now out of prison for the last decade or so, Varge has not rejoined the band surprisingly,even though he still made solo albums in his prison cell,and now a free man,is still plying his trade as a metal musician in,of all places, France (Shit! I live there!?)....although he may,as a convicted Murderer, Arsonist, and neo-Nazi find it difficult to get a visa to visit any of the many non-EU nations who have a Metal audience interested in this shit.
Yes, its all very fucking silly, but early Mayhem were in fact rather good.Making unlistenable soulless metallic noise that would undoubtedly put the shits up any passing Christian or,even better, Muslim.....so anything that can do that is fine by me.
Suicide, Murder,Arson,stabbings,slashings,atheism,ultra right wing paganism,high speed noise,and all in glorious,atrocious,deafness inducing shit-fi too.What more could anyone possibly want from a pop group?

Great stuff JV, good to have you back bud.

hi so good to have you back, with a lot of good stuff as always! thnks

Your zip has a trojan, asshole.

And your mouth should have a Zip....its been checked,its clean ,unlike your asshole or your language.

Yes, it's a very special trojan that only the infects the computers of nobheads.

your computer must be full of them in that case