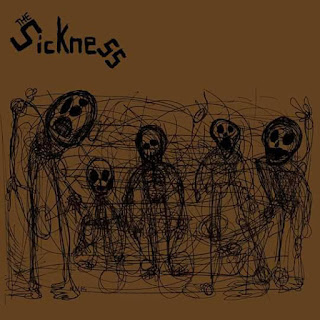 The group that kinda beat Flipper to it,but were in the wrong town were The Sickness from Boston;a town more famous for its straight edge hardcore puritans,rather than the crawling slovenly gutter punk of The Sickness,and her relatives.
If that wasn't good enough, they then divided like bacteria to become Kilslug and The Groinoids.The Groinoids especially often finding themselves on Hardcore compilations surrounded by a bunch of Dischord wannabees,going on about womens rights and other very noble themes.
Minor Threat they ain't!?The Sickness undoubtedly got Drunk,took class B drugs,and celebrated the seedier side of life. They either meant it, or they were living art objects,reflecting their intended targets in noise. This stuff is for people who won't 'Take the Knee', and I'm not referring to our Eastern European chums....those ethnically pure swarthy mono-browed Hungarians actually mean it when they boo and make monkey noises at the Black English footballers. This music is about,but not by, those cro-magnon survivors who are a casually placed Nazi salute away from actually killing someone who isn't like them.They're just waiting for the next term in office for the horrific Mr Trump,or his endorsed clone;but this time it'll be no-more mr Nice Guy...he wants 'revenge'.
I hear the Donald's approval rating is now above Biden's,so get building that bunker now while you have the chance.....and take some Sickness,Groinoids and Kilslug down there with ya.
Tracklist:

I can't be arsed to copy the individual links, but the user box over at everybody's favorite RIAA-sponsored watering hole Exystence has another load of VOD stuff up if anybody's hankering for them.