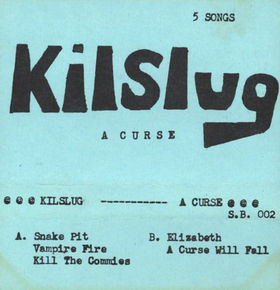 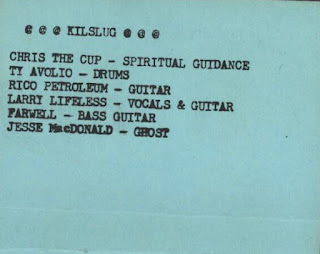 Around '82 at the height of the vintage US Hardcore fad, there were some enlightened souls who decided to go in the opposite direction and slow it doooooown.The long shadow cast by Flipper and Swans had rightfully steered some away from the blind-alley of punk stuck in first gear with revs in the red zone and nowhere else to go. To continue the petrolhead analogies (I fucking hate cars!), these clued up slowcore groups took the rev's back down to idling speed,so much so that one could actually hear what they were singing about?
This slowed down Punk rock, nothing mid tempo here, now had choices rather than brainlessly driving into a wall.You could go the quiet introspective route of Low, or the arty direction of Swans, or get brutal like the beyond praiseworthy Drunks With Guns. The fantastically named Kilslug,obviously took the grungy punk route as popularized by Flipper between overdoses.The genre,whatever it was called, also included the magnificent Killdozer,but I think Kilslug got to use the word 'Kil' first I assume.
Dirge-Punk,Sludge,Post Hardcore,whatever you want to call it,i guess,like Punk proper, led to less attractive Metal offshoots,like Doom Metal,and Sludge-metal,and virtually any prefix you can imagine with Metal added to it.......quite like a bit of Doom Metal personally,as long as the vocalist doesn't try to sound satanic,whatever that may be?....Deranged shouting at the back of the mix is the only requirement vocalistically (made up word)Thank you.
NB:
The long silence and tape disintegration on "Kill The Commies" one assumes is deliberate?....if it isn't it should be.
Tracklist:

A1 Snake Pit
A2 Vampire Fire
A3 Kill The Commies
B1 Elizabeth
B2 A Curse Will Fall
DOWNLOAD the curse of kilslug HERE!
Posted by Jonny Zchivago at 08:48

'kill the commies' is fucked yeah. actual length is 4m06s. my friend did this rip of 'a curse' from my original copy around 2003 along with everything else i had by kilslug, upsidedown cross, etc and related up until that time to share on soulseek as a larry lifeless motherload. the latest related release was adolf satan 1st s/t demo so yeah about 2003. he did a faultless job of everything else but missed this faulty version of 'kill the commies' which did not even realise until few years later well after it had done the rounds! if you want i can provide you with another rip which is spot on that you can share with this post instead?

Thank you Mr Black Op's.I'm dure the world would be a better place if you would be so kind as to share the non-fucked version with us all.