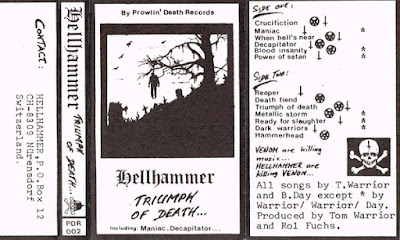 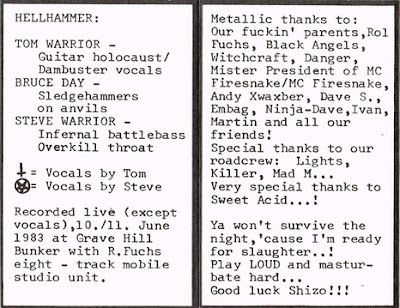 Well....We've had a band called "Dead" whom shared a name with the second most mental member of Mayhem...the one wot shot himself. So now we find a very early Black Metal trio in the Venom/Motorhead mode whose name was commandeered by Mayhem's Drummer, Hell Hammer.....one of the more sensible members of Mayhem one must add;but that ain't saying much.
This Hellhammer came from the repressed and impoverished hell hole we know as Switzerland, where life is so unbearably awful that it makes young men so unhappy that they just wanna sing songs about death and violence all the time.
I'm not sure if it's an urban legend or not, but doesn't every Swiss home have a nuclear bunker,and own at least one handgun?
Indeed gun ownership is rife,yet the murder rate is one of the lowest on the planet. Maybe this is achieved because of the cathartic effects of Black Metal? We'll never know,but there seems to be very few Swiss bands that manage to escape the Alps and spread their secret. I can think of Brainticket, Kleenex, Yello and...er....Hellhammer!?....quite a mixed bag,so maybe they're brainwashed at school to be bland,neutral peaceniks with guns.....I dunno.Or maybe they just ain't stupid like American 2nd amendment waving rednex. Having visited this stunning country,they do seem to have the slowest law abiding car drivers i've ever tail-gated. It's all quite weird,especially when the shops close at four in the afternoon on Saturdays!? Its that Nazi-Gold (or dead jews teeth) they stole during the war I reckon?
It seems ,on the insert, that Hellhammer don't like Venom too much,which is obviously incorrect,as they'd be called Venom 2 if they were a horror movie franchise.
Its all suitably raw,and spacious,which is unusual for metal albums.The Bass clawing is particularly impressive,and the vocals very Lemmy-esque,which seems a prerequisite for the birth of Death Metal...the growling and grunting evolved later it seems.
Basically, whoever had the bright idea to take these groups into a good studio should be forced to listen to Metallica (can't believe that was in spellcheck!?) for an unspecified period.....i am aware that this may be against most conventions on Human Rights,but needs must.
Tracklist: