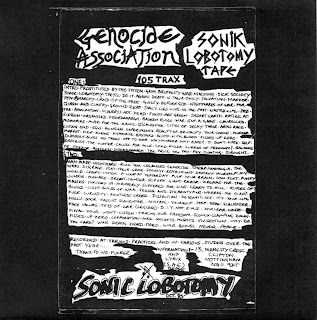 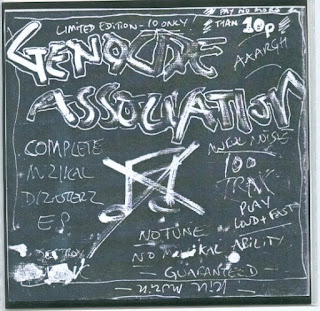 As a bit of a fair-weather Hardcore Punk fan,if I can,or endorse someone else,being a fan of anything; wot are my bestest three Hardcore albums?......this kind of behaviour strays dangerously into record collector twat-geek territory,but, believe me there is a point to all this,just bare with me.
I like that first Discharge Album,if you can actually call Discharge Hardcore,it sounds more like an avant garde masterpiece to me.Then top of the US Hardcore tree has to be Jerry's Kids' rather good "Is This My World" record....was that drummer on some type of performance enhancing drugs I wonder?
So, number one has to be, no not Minor Threat,nor,Napalm Death mk1,and incredibly not even Impulse Manslaughter.
Of course,and you may have already guessed....especially as the title is on display at the top of the page, It's ,from the home of Grindcore,Nottingham's own, Genocide Association innit?
105 brief tracks,or one long track depending on how you hear it, of cut'n'paste hardcore plunderphonia squeezed into 30 fun filled minutes.Apparently Minor Threat did actually get looped somewhere on this tape.....there's a prize for he who locates it.
What makes this even better is, in the proud tradition of fake bands,Genocide Association are nothing more than Dig of earache Records,before he'd heard of Thatcher's Enterprise allowance scheme....yes,Thatcher gave us Napalm Death and Grindcore...and mate Dayve from some other group. They had the bright idea to cut up a bunch of Hardcore demo tapes,rejig the constituent parts and make some rather crazed backing tracks for their shouty vocals.So, ideologically, this tape has a lot going for it in the Die or DIY? ethos of copying obscure cassette works from the punk hinterland and giving them new life. This was early Plunderphonics for want of a better synoptical cliché. If John Oswald had come up with this, it would have been lauded as an Avant-Garde statement of Noble Prize winning proportions.....rather like Discharge's first album. There are times when one asks oneself,"What the fuck am I Listening to"?...Which is the number one,and increasingly rare, look-for moment in any music is it not?
As mentioned in The Maximum Rock and Roll musical toilet paper, and Hardcore Bore Bible:
"Genocide Association (are) A bunch of xtreme nihilists/anartwits who despise the widely held concept of 'Anarchie' .. Possess no instruments.. Cynical to the point of lunacy."
How much more 'Punk' can one get than having no instruments,believing in nothing as controlling or as silly as Anarchy as your raison d'etre, and best of all, never playing a gig.
The fact that this was before samplers were affordable,and all this was done by laboriously editing the vocal-less parts from a pile of Punk Rock cassettes onto a couple of Cassette decks riff by riff, play/record/pause, change tape, repeat,is nothing short of inspiring .So the time signature can get a trifle eccentric from time to time,and the patchwork style sonik quality is endearingly inconsistent,veering from rich boy demo studio quality to one mike in a garage static fog
So, yeah, this is the best Hardcore Punk Recording of Allllll Time,musically and ideologically....Discuss.
Tracklisting:
"Sonik Lobotomy Bootleg EP" (13:03)
1.Intro
2.Prostituted by the System
3.Grim Brutality
4.War Machine
5.Sick Society
6.Sonic Lobotomy
7.They'll Do it Again
8.Death Is Their Only Salvation
9.Marker Pen Anarchy
10.Land Of The Free
11.Guilty Before God
12.Nightmares of War
13.For Queen And Country
14.Ground Ero
15.Daily Lies
16.Live in the Past
17.Wasted Life
18.Pass the Ammunition
19.Salvery's Not dead
20.Fields Are Green
21.Desert Earth
22.Retired at Sixteen
23.Organised Disordaaargh
24.Broken Rules
25.War Isn't a Game
26.Laurelled Memories
27.Music for the Manic (S)laughter
The Complete Original Demo:
28.105 Trax (29:57)
DOWNLOAD a load of trax HERE!
Posted by Jonny Zchivago at 11:10