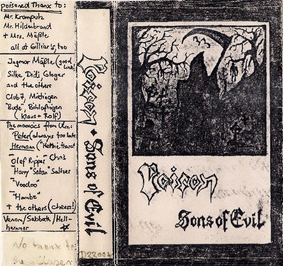 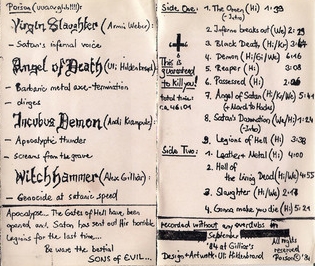 Death Metal can either sound and feel like you're having your head kicked in, like Slayer's immaculately produced ear batterings; or, like having your inner ears dewaxed by a hammer drill whilst being surrounded by multitudes of arcing electrodes,which is where we find ourselves today. Depending on the group,some of these electrodes will be attached by crocodile clips to your balls,or whatever are now the sensitive parts of whichever gender you self-identify with nowadays.
This demo,is actually an unedited live rehearsal by German Death Metallers Poison, recorded in what sounds like a vast empty gas chamber,or an abandoned public toilet built on an ancient burial ground.
The guitar frequently does a rather accurate impression of one of the more harsher Merzbow albums,with a sound not too far removed from a tethered moped on full throttle in the hold of an oil tanker. The bass is inaudible,and the drums have that adorable DIY biscuit tin and bucket quality,overpowered by one side of a C-90's worth of the last words of somebody being garroted .
Its all quite ridiculous of course,but it sounds fantastic.
Tracklist:

Hey arschloch, there were NO gas chambers in Germany. Unlike USA, where they criminals executed. Churchill, Eisenhower, De Gaulle and the head of the maquis NEVER mentioned gas chambers in their memoires, not one word. They thought the lie would be finished like in WW1 when they used the SAME story then, Germans gassing prisoners, beheading nuns, stabbing babies, etc, NONE of what was truth. History written by winners, truth and history are not good bedfellows.

Future generations will read the convid 19 killed trillions in days, people dropping down dead, maggots all over rotten flesh, undertakers unable to cope with demand, YET some of us know the truth, some of us are not bat soup crazy. This evil creature, well…it’s not actually alive…this thing, this VIRUS…is quite intelligent, and that’s why it’s so effective. Even though lacking a brain, heart, nervous system, arms, legs, wings, or anything else to make it functional or give it a modus operandi, this mini-monster has jumped and flown and traversed oceans (after escaping from its normal hangout in a bat, or civet-cat, or pig or something, it’s all a bit muddled), and ended up in Tom Hank’s nose. And in Australia, of all places! We know that because he said so, so it’s true (and it was reported in the New York Times). We also know (as reported in The Guardian), that this virus had a fling with a couple of Chinese nationals, killing one of them by mistake, before making its mysterious journey down under.

After landing in Tom’s nose, this brainless but brilliant particle of protein with a snippet of rna or dna or some other bat (or civet or pig) fibers attached, bored straight through his protective mucous layer, managed to sneak past a few white blood cells, and arrived at the door of a very, very, good- looking cell on the side of Tom’s sinus cavity. Slimy, but beautiful. Our little particle prick couldn’t help himself, of course, he knocked, and she let him in. And if that wasn’t bad enough, he didn’t tell her that he was a bat, or civet, or pig, or whatever, and that his jism just wouldn’t get the job done in the end. But she didn’t care, and she didn’t ask. He stuck his rna in her dna, and contrary to all the known laws of biology, the earth moved. This suited both of them just fine, so he kept stickin’ it to her, and boy did she ever respond. Now and then she would swell up and burst open, and lines of cute little rag-tag protein particles marched on out of her, kind of like Snowwhite and the seventy dwarfs.

As a result, Tom got the sniffles, then he sneezed. Unfortunately for the rest of the world, Tom did not shove his mouth into his elbow before letting loose. Worse yet, he sneezed again, no elbow. It was probably the second sneeze that infected the prime minister before he traveled to America. The CDC should know about this stuff, and they say that a second sneeze is usually necessary, with an effective range of from one millimeter to six miles.

In case you’re wondering, Tom got well, but of course he’s a great empire patriot, so it figures. The big mystery was how in the world could a bat protein prick impregnate a human sinus cell. After all, everyone knows this cross-species stuff can’t happen, with the wrong dna/rna and all. The medical mafia kept putting the story out there that the viral prick-dude would “hijack” the cell, or “trick” the poor thing into (get this!), allowing it to REPLICATE. Makes a lot of sense, right? I’ll stick with the story above, just pure lust and earthquakes.

Finally, I have it from good sources that a collaboration between Rockefeller / GatesFoundation / Microsoft tech wizards figured out a way to get micro computers installed in all those nasty little v/buggers, and that’s how they fixed the glitch in the copulation chemistry. And that’s how the west was won, and why the Empire stays strong.

Didn't say there were gas chambers in Germany twat (but I do mention something about that in the next Poison post).....couldn't be fucking bothered to read the rest...but keep commenting,we need nutters like you to stir things up a bit.

Wow - Poison were fantastic, with hit songs like Every Rose Has Its Thorn. It's too bad they didn't make an MTV video of "Inferno Breaks Out" I'm so glad you're posting this so everyone can hear the classic Poison!!!