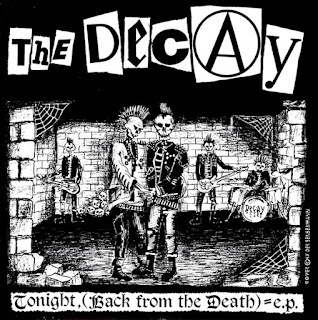 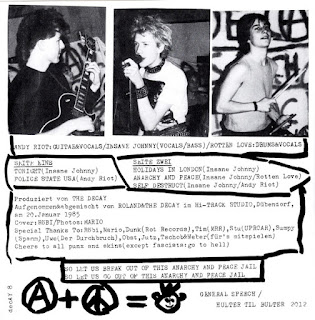 Ah bless 'em......classic Swiss punk by numbers with a guitar sound that must have been fed through a transistor radio then miked up through a cheap but louder amp. I had a similar amplification device in the 80's, purchased from Tandy called the Archer mini-amp,which you could easily overdrive the fuck out of and it would sound not unlike Andy Riot of The Decay's fizzing and spitting Guitar sound,if fed through the PA.
The staggering,hopefully intended, incompetence on offer on this EP is as accidentally abstract as The Accused of "Mell Square Musick EP" fame from 1980.(more Accused HERE).
This undoubted charm remains intact from Insane Johnny(the Singer) and the boys,despite the wonderfully meandering time signatures,which in classic Beefheartian style seems to involve at least two different timings playing at the same time,which is very difficult to do, unless you're doing it by the forgivable mistake of incompetence,or got no monitors?
I can't imagine anyone notating the parts on these wild tunes, Drumbo style;but this Drummer, Rotten Love (!?),has that rare talent of doing just what the fuck he feels like doing irrespective of what the other musicians are contributing.This is how Punk Rock should sound.Listen to rock'n'roll decaying in front of your ears and dream of what might have been.
Tracklist:

DOWNLOAD the decay of rock'n'roll HERE!
Posted by Jonny Zchivago at 00:44

One of the charms of DIYers is that with laughingly cheap equipment and just a touch of imagination they could create a racket that big timers would waste countless hours and dosh on and never quite get. You have to use quality equipment like that Archer/Radio Shack 200mW speaker; No, not watts, MINI/MICRO watts. I bet you look at it the wrong way and it would howl out nasty distortion. You don’t still have it do you?

@ REV.B....sadly i no longer own an archer min-amp,with its glorious 200micro-amps of power.No idea what happened to it. Its the same story for a lot of great equipment i've had over the years....i still have my fostek cassette multi-track, but remember selling a Korg MS20 for 23 pounds to a junk shop so i could buy one of those new fangled digital reverbs!...no-one wanted them! My Boss Doctor Rhythm Dr-110 went for an unknown price...and i can't bring myself to mention the idea that upgrading to digital,also known as downgrading, mean't i didn't need my Space Echo anymore!? There's more!?

Hey man you've probably gotten this comment multiple times already but I just wanted to say we (We meaning people who stumble across it) really appreciate this blogspot. Nevor stop

Hi,
During the '80s I used a phone amplificator (Aiphone), replacing the original electric-field microphone by a small high speaker glued on my childhood's classic guitar I never learned how to play with. It made a self amplified classic guitar with an extreme distorsion. It was my father's telefon technology I could discretely borrow and it disapeared with him in the mid '90s. Later in the '2000s, I found all kind of second-hand phone amplifiers (archer, Hercules, realistic, aiphone) and began to bend it as larsen organ and killer distorsion...
Long live to DIY !
http://idata.over-blog.com/2/54/61/39/bendings/larseno-souris.jpg
http://idata.over-blog.com/2/54/61/39/bendings/larseno-footswitch.jpg
http://idata.over-blog.com/2/54/61/39/bendings/guit-larsen.jpg

Hi there
a friend just sent me a link to your review of THE DECAY EP.
Very flattered to read it! And yes it was halfway planned to be
like it is. We were/are punks NOT musicians.
Besides singing i also played the bass and since the bassist
was kicked out just before studio time-it was my first time
to play these songs-first take.
I take it you reviewed the 1985 version of the 7'' with the
engineer-remix.We hated this! In 2012 friends released
the 7'' with OUR original mix that was refused by the press
plant back then saying: "this will blow up all speakers!".
I love that 7'',cos it's what we wanted it to be.
Anyway,i was honoured to read your late review!
Cheers
Insane Johnny(1983-1985)
aka
Pablo