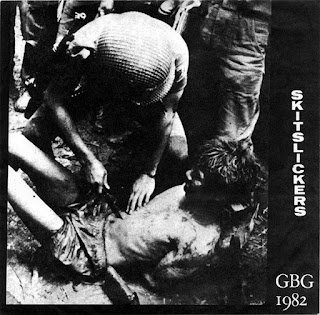 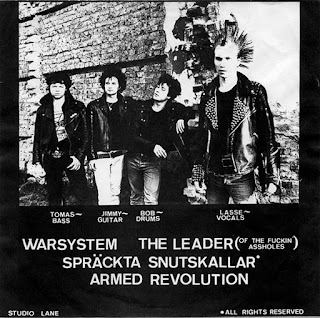 That Stoke-On-Trent look travelled quickly to our Scandinavian chums just across the North Sea.The American Hardcore dressed down image firmly rejected for that popular Northern English more Sid than Sid caricature that still pollutes the highways and by-ways of many a town from Santiago to Vladivostok (travelling clockwise of course!) . These guys liked Discharge....a lot.And who can blame 'em.Rather magnificent was Discharge for an album and a half at least.....But...This Shitlickers EP,now expanded from the same sessions, wins my personal award for the best Hardcore and its derivatives vinyl EP ever self-released by a bunch of scandinavian spikey tops this side of the north sea oilfields.
Only five years between Wire's seminal "Pink Flag",the LP wot started this ultra reductionist approach, and this bizarre racket is what Punk Rock had evolved into by 1982.Times moved fast back in them daze. Now the renaissance has finished,nu-forms are stuck in the quicksands as is time.
Your author has come across a fan review which included a fine description of the...er... music(?), served rare on this black vinyl platter.I think this sums up the sound most adequately indeed:
"Fantastic EP that sounds like it was recorded in a rusty garbage can covered in piss"(Unknown critique).....one of course concurs somewhat.

1.Warsystem
2.Armed Revolution
3.Spräckta Snutskallar
4.Leader (Of The Fuckin' Assholes)
5.Silence
6.Desperate Scream From The Heat
7.The Night Of The Holocaust
8.No System Works

Thx a lot for sharing.

WHO TELLS THE CUNTS TO GO WHERE THEY GO??

THE LEADER OF THE FUCKING ASS HOLES!

Yes, welcome back and pure quality here. Name of the band is not Shitlickers but Skitslickers. Means nothing, although easy to associate to shitlicking, as the English -ers suffix is totally inappropriate. Which is very appropriate. Magnus.