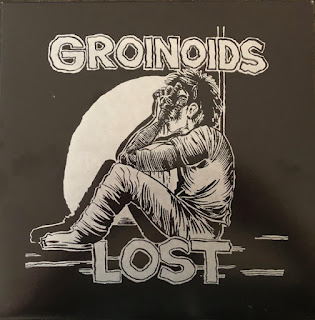 When a band has a singer called Mongoloid I think you can guess what you're in for? A trailer park trash vocalist out of his brain on Duff Beer and angel-dust,backed by staggering repetitive punk played at 16 rpm.This is what you'd get if you used the teleport device from the Fly if you teleported Drunks with Guns ,The Melvins,and a housefly covered in dog shit, to the same location at the same time.Emerging out of the theatrical smoke arises four spitting and blood oozing pink masses of meat...but with guitars.
Tracklist:

A1 Mindfuck
A2 Dinkweed
A3 Up Your Bucket
A4 Ain’t
A5 Creepy Little Kid
A6 China Lula
B1 The Vault
B2 Flesh Island
B3 Turtle, Duck & Mule
B4 Crematorium
B5 Spread For The Devil
B6 Ratfink
DOWNLOAD and take the knee to the groinoids HERE!
Posted by Jonny Zchivago at 10:06