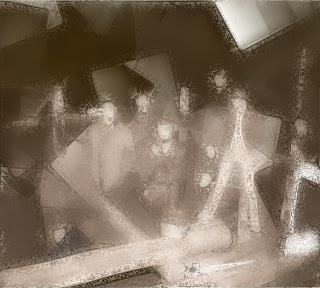 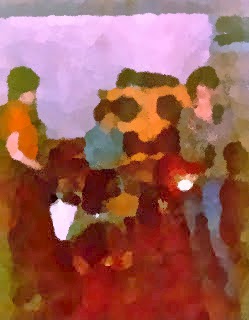 During the good old days of Die or DIY? version 1;one had great difficulties posed by a certain Mystery DIY Band, who obviously had a member who had gone on to join the other side. Every time I put their EP's and Demo's online, they were taken down, no matter where I hid them. They are either very embarrassed by these recordings or,have some awful ambition to one day make some money out of them,which regrettably makes them 'Fake'!
This doesn't detract from the greatness of their music,which you can now access here as 'The Mystery Band', which will hopefully avoid these twats from getting it taken down again!

But for a bit of fun here's a clue to their name:
1/ Fill in the missing word from this Pop Group classic: "She is ________ Good and Evil"
2/ Complete this some bizarre Matt Johnson vehicle: _____ The.
3/ What is the opposite reaction to Explode?

Put the three answers together and you get the name of 'The Mystery Group'......isn't this fun?

More classic 'Outsider Punk' or messthetics,whatever you want to call it. A classic DIY EP, crammed full with weak vocals, cheap guitars, muffled drums, and buckets of charming naïveté. Sounds like it was recorded in a council house living room, full of synthetic curtains, flowery wallpaper, and shagpile carpets.There's even a few infectious, but spidery, melody lines to jolly the uncommited along.This is POP, yeah yeah!

Then we have The Mystery Band's second EP, and they've got more competent, and have listened to the Fall. A fine example of do it yourself post punk that sank without trace under the torrent of such product in the so-called Post Punk era. Released in a limited edition of 250,how could they compete with Factory, Rough Trade and Virgin,who had the market sewn up. But that's why we love the also-rans like this classic Fall-wanna be nugget of DIY majesty.

Then finally, we have a C-60 of Mystery Band demo's and rehearsals.
Information is very thin on this one, but it sounds like a bootleged collection of rehearsals and demo's recorded on one of those press play and record cassette recorders with the built in mike.
The sound quality is classic shit-fi DIY cassette recording, including the odd bit of microphone rumble , but thats how we like it.
This is like discovering a fossilised fish from the pre cambrian waters of planet DIY. One forgets that these groups often had more than the handfull of songs that ever made it to vinyl, and here is the evidence.
Not that the group want us to hear them!? So take this chance now while this is still available.Someone from this group is very good at getting things taken down.......even from hosts based in Russia!

"man, screw these guys and their music. Every time I try to listen to one of their albums, it's been taken down already by the time I get to it. I give up. Fuck em and their music. It might be this or that according to people, but I don't even care to try to listen to it anymore. Sure as hell won't buy any reissues if there are any. Whoever is taking all this shit down is a bitter old wanker, and I hope they are reading this."

DOWNLOAD and solve the mystery HERE!
HERE, and HERE

i can smell 'em too, but they ain't that clever.
Z

Feels good to hear this music just on principle, regardless of if it sucks or not. Good job JZ.

Obviously some twat's sitting with a wee box of old singles and trying to punt them for silly money. Can't have the public enjoying these! (Which I did! Ha!)

To be on the safe side, maybe you should just make this available for a limited period, to reduce the risk of you being pursued via blogger etc. It's bound to end up on their radar eventually!

I hear what you're saying Anonymous, but to quote illuminati fall guy Margaret Thatcher,"one never negotiates with terrorists."
in fact it turned out that she DID negotiate with terrorists; or as we,the unbrainwashed minority call them,- "Freedom Fighters"; which is how I see the blogger-sphere. so does that make ME the Terrorist?

"All the original text is included in the Download File as a pdf document, including track listing and artwork; then all will be revealed."

It doesn't seem the PDF form actually made it to any of the box.net links...I'm really looking to figure out what's on the demos and rehearsals

hi Happy one,
i don't think i can remember what was on the pdf file now...its been deleted so many times by Beyond The Explodes' singers widow. I don't think I ever had the track listing for the demo's/rehearsals....but i'll have a search.I may have an e-mail from another BTE member somewhere...i'll have a look see.

From your original posting on 11 December 2012:

I was able to pick up all the Mystery eps from other sources, but would really like to hear that initial C60...

I'll be quiet as a mouse. Promise.

I'll sort it out P.....i should update it really,and edit the tape into tracks,and 320K it...anyway the mystery of who was complaining at posting this group on the net is...it was the wife of the singer,who died, and she thought,with this boom in interest in UK DIY that she might get some financial recompense eventually. The other members of the band were fine about it.
Will re-up laters.