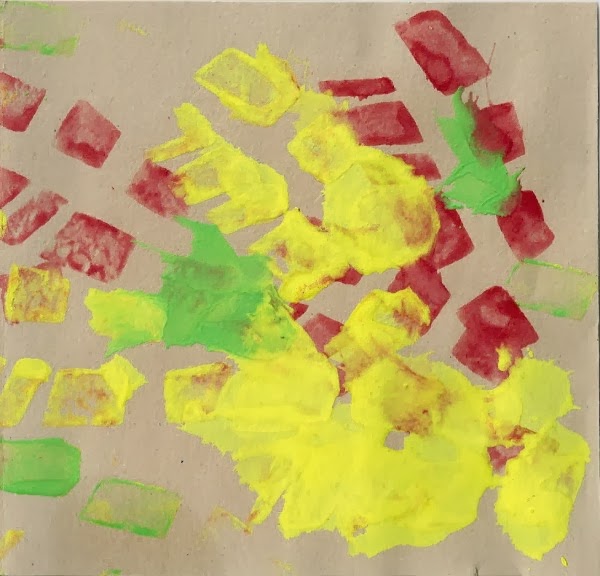 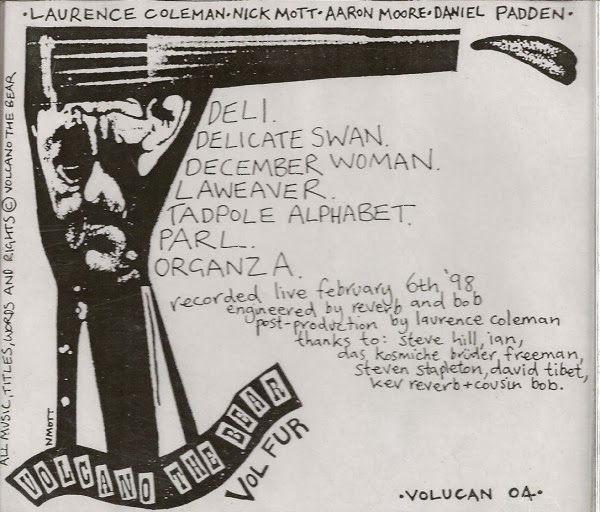 Was gonna post the brand new Philip Johnson record, but my computers playing up!!!.....so, we need one of those groups who deliberately set out to make "weird" music to fill the void. Then I thought of Volcano The Bear from my home town of Leicester, UK. Who briefly I considered joining in 1995,before they had a name;didn't obviously, but I kept a keen interest in their work,and attended most of their early performances (I've probably seen Volcano the Bear more than any other group,except, bizarrely, Eddie and the Hot Rods!?!) and bought a few of their home produced cd-r's. A-haaaa, I thought, i will post these discs on the internet, and sallied forth to dig out these early cd-r's. But......what is the crapest ever medium for the storage of music? Cd-r's are!
You are guaranteed to lose anything stored on an early recordable cd-r, and low and behold, when i attempted to copy them, all i got was a jumbled noise of glitches mixed with snatches of interference from the band. This sounds all very avant garde, but the object of this exercise was to reveal early live Volcano the Bear to an unsuspecting world.
However, I did manage to salvage three tracks from the performance on the 6th Feb 1998 at the Physio and Firkin pub in Leicester; from a cd-r called "Vol Fur".
Its a fine performance from the eclectic world of the collective members of the band; liberal splashes of Das Kosmishe musick, jaki liebezeit, the Residents, This Heat, and anything else that lurked in their record collections;even the artwork is distinctly Pore Know Graphics inspired. A record collection mostly gathered enthusiastically from the Ultima Thule record shop near the railway station in Leicester. The proprietors of said emporium would frequently be seen loitering in the shadows at a VTB concert, like a pair of perpetual adolescents who had just escaped from their sweatly bedroom ,after being locked in by their disappointed parents sometime around 1972. Steve, I think his name was, looked like a pasty owl with a nest on his head, and spoke like a creepier version of some krautrock obsessed Peter Laurie. The other one looked as if he'd had a bad time in the bedroom,and barely uttered a word, probably thinking about the lost Agitation Free album he'd been dreaming about for twenty years.
But the VTB boys had a sense of humour, and you wouldn't believe that some of them used to be in an awful post-hardcore punk band called 'Scalpt'.
Then after this they were taken under the wings of Steven Stapleton and David Tibet,and went on to international acclaim.Tibets' dark folk obsession having a marked influence on the future VTB sound. Best record in my opinion was before these dodgy blokes got hold of 'em; ie "The Inhazer Decline"
Gooddd Neewws:
The download only included tracks 2,3,and 4. The rest had disintegrated over the ensuing 13 years.(But I now have all the offending tracks thanks to Aaron Moore, of Volcano The Bear,himself!)
Baaaaaddddd Neeewws:
The Freeman brothers were gonna send me all their early cassettes they recorded under various guises; but I think after they read my ,tongue-in-cheek, description of them(see above),they changed their minds. Sorry boys.I won't say 'Ahh Diddums', because you had great record shop.

Produced by Kev Reverb, formerly of another Leicester band, the inexorably terrible 'Crazyhead'.

why the hell would you write that stuff about the Freeman brothers before they sent the cassettes, man? I was laughing my ass off but jesus christ haha

Its all a bit of fun innit?

To be honest, you couldn't drag me to Leicester! So I'll say it: Aww Diddums!

I wonder what idyllic paradise you reside in mr Badgerstump?