Greenfield Leisure - "L'Orange e.p" and "Those Far Off Summers e.p" plus unreleased recordings.(1981-83) 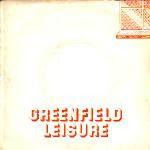 Greenfield Leisure eh? Famous contributors to the fabulous "East of Croydon" compilation from 1981.Such was the great wealth of fantastic music in the late seventies early eighties, that many acts we would give our eye-teeth for now,were swept under the hideous carpet of stuff like "New Romantic" or "Goth"....urrgh!
One such victim of this crime against culture, was the aforementioned Greenfield Leisure. Someone has likened them to the Monochrome Set, of which there are hints of, and they even have a suggestion of "proto-indie" lurking within their catchy toons.(been playing this whilst I work,and i'm damned if I can't stop singing "Too Fat to Frug"......good toon though!)

The history of the band is best explained by bandmember Rory Manchee:


"The band all came from Orpington (part of the "east of Croydon" in-joke...) where we were at school together in the 1970's. The band started as an exercise in home-recording (i.e., endlessly "jamming" in our suburban living rooms) and evolved into an attempt at becoming a pop group, but with songs coming out of improvisations rather than traditional verse/chorus and middle eights. Inspiration came from the likes of The Swell Maps, Buzzcocks, Throbbing Gristle, Cabaret Voltaire, Faust, Eno, Pere Ubu, Marc Bolan, Magazine, Bowie, Can, Devo, Kraftwerk, The Damned, Joy Division, A Certain Ratio and post-punk indie-funk/noise/electronica and dub reggae. Even if we never managed to sound like any of our influences.

We recorded 2 EP's ("L'Orange" and "Those Far Off Summers"), released on our "own" Strange Orchestra label (ultimately backed by the IKF pressing and distribution network). I think there was a trend at the time for "vanity" labels, and through an accident of geography, we were connected to an interesting bunch of musicians, producers and record labels - e.g., the Normil Hawaiians released some early stuff on Dining Out Records (which Guy Smith ran?) before signing to Illuminated Records; the East of Croydon comp came out on "Nothing Shaking" records, which was probably "owned" by one of the other bands on the album; and Kevin Armstrong (Local Heroes SW9) became something of a "local hero", ending up playing on records by Prefab Sprout and Thomas Dolby, playing with Bowie at "Live Aid", and being a member of Iggy Pop's touring band.

Through this vague network, there were also some tenuous links to Charlie Gillet's Oval Records, as well as to Illuminated Records, plus Dave Anderson (ex-Hawkwind) who ran Foel Studios - it was probably through these contacts that Steve Goulding ended up being our drummer for the "Summers" EP, and for live work.

We recorded the "Summers" EP at the original Ariwa studios in Thornton Heath, run by Neil Fraser, otherwise known as The Mad Professor. You can hear his touch on the unreleased versions of "Too Fat To Frug". I would love to have heard him give that track the full "Dub me Crazy" treatment....

The main reason the third EP was never released (let alone recorded properly) was because IKF went bankrupt in either 1981 or 1982. However, rather weirdly, the EP did get a catalogue number, and was "scheduled" to be released on Illuminated Records. According to the entry I have found (link below), the title was going to be "Candies EP" - in honour of several pet dogs all called Candy - but really it should have been "The Dead Candies", as the dogs had passed away by then, and it would have been a nice pun on Jello Biafra's group. I can only think that this blog entry was sourced from a trade publication which used to list forthcoming releases on indie labels:

Another reason for the non-release of the "Candies" EP is that the band all went our separate ways to work/study/start families - plus there were probably the usual "musical differences". Simon Marchant and Simon Pritchard (along with Cliff McLenehan, part-time bass player for "L'Orange") joined the Normil Hawaiians on their journey into post-punk prog/psychedelia - http://www.normilhawaiians.co.uk/

Simon Pritchard self-released some albums on cassette ("Handle Had A Candle" and "Dog-Like Jeans"?).

Nick Kenway and myself played in various line-ups with Richard Formby (guitarist with Religious Overdose, In Embrace, Jazz Butcher, Spectrum, Dakota Suite, etc. and indie producer at large) and Alaric Neville (Bridewell Taxis, Cud, Ukrainians, Oyster Band), and even a spin-off group from the Hamburger All-Stars (check the classic "One-Million-Hamburgers" HERE!) called the Mumbling Maracas. Sadly, apart from some bedroom demos, and a dreadful live tape or two, nothing survives from these ventures.

That probably takes the story up to about 1983, and a good place to finish."

"P.S While the band decide whether to get back together, at least one member of Greenfield Leisure has been back in the studio after a lengthy hiatus...as Wharf99, with a very sucessfull angle on the style of electronica persued by Dave Jones and Colin Potter etc in the early 1980's.
Check Wharf 99 out at the links below:
a) Year Zero Records
b) http://wharf99.bandcamp.com
c) http://soundcloud.com/wharf99
Posted by Jonny Zchivago at 11:51

Is there any chance you might re-up this at some point, I've only just "discovered" Greenfield Leisure & the hosting site appears to have vamoosed, taking your files with it? (Grrr...)

Also, do you have the "fabulous" East Of Croydon comp you mention herein, I'd love to hear Normil Hawaiians' contribution (& the rest of it) (probably).

Of course i will. It was one the last ubuntu files which went down the toilet about 2 years ago.....and you're the first person to raise this issue about Greenfield leisure.Shows you how popular they are?
I did do an album with one of Greenfield Leisure a few years ago....Meat Kiosk, as seen on You Tube.

I have tragically mislaid 'east Of Croyden' which was rather good.

I'll sort this out in the morning.
leaving for the UK in the afternoon,am planning on going to Rock City next week to see Kunt and the Gang.Should be a larf.

Rock City, eh? It's been a while since I stepped inside that fetid dung-hole... seems like I spent most of my 20s there with my feet stuck to the lager-sodden carpet watching useless bands struggling to make themselves heard through the crappy factory tannoy sound-system, etc. Can't say mine & Mr. Kunt;s paths have ever crossed, though I'm aware of his "oeuvre"... reminds me of the Macc Lads (a bit).

Just wanted to also throw out a thanks for re-upping...was looking for this for a while...props to you sir

Thanks for the link. I've been looking for stuff for years. Have had the East of Croydon disc for sometime and by far the best track is Greenfield Leisure. Very happy!

Omg... Randomly thought of L'Orange and had to Google it as couldn't remember the band..
I bought the single when I was so young
many years.
It was so cool and different..

Its been a long wait,but now you can experience the unreleased stuff at your leisure too! its what the internet was invented for.