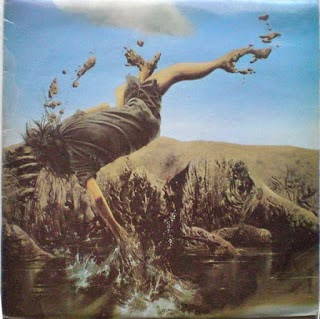 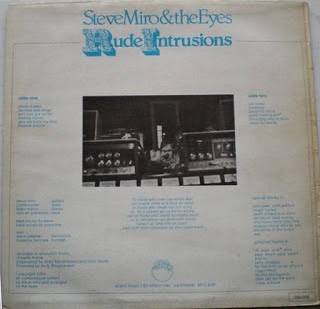 This cover screams Prog Rock,and Steve Miro is obviously an ex-progger adapting (rather well) to a post punk world. Its all there, prominent keyboards, including synthesizer solo's, well played melodic Bass playing, but crammed into the three minute symphony bracket.
There's nothing wrong with this of course, I describe myself as a prog rocker (mainly to wind up boring middle aged/middle class 'punks',aint they becoming the new hippies?), and wasn't post punk, prog rock in disguise anyway? The keyword is 'progressive', not 'Regressive' as in Yes and ELP. Looking to advance the art of modern popular music; and I think Miro achieves this goal in a small understated way.
Anyway, anyone who says Van Der Graaf Generator weren't a great proto-post punk band must be either deaf or stupid! (although Miro is obviously not in the same league as Peter Hammill one might add, but did still tread a similar path.)

or to be intruded even ruder....

DOWNLOAD it HERE as well?
Posted by Jonny Zchivago at 13:53

Hear hear for VdGG - I saw them at the Barbican last year and the remaining members still sound great. Certainly not incompatible with the DIY scene given Peter Hammill's liking for taking risks in live shows (which don't always pay off) and being a pioneer in attempting to step outside the traditional record company model with early home-recording, although you still needed a record company to release your stuff in those days. Really great blog with loads of interesting stuff. Don't suppose you've got any Human Cabbages at all?

Thanks Anon.
Yes, VDGG still sound like they did in the early 70's.If you close your eyes.
I am a huge fan,and have acres of boots and unavailable stuff.As original prog goes,its Them and King Crimson 1972-75 that does it for me.
It may all seem incompatible with DIY ethics,in fact musically its at the opposite end of the scale; but you need balance, and as long as the attitude is right,it all comes under Rock'n'Roll for me.
Sorry, No Human Cabbages.Yet.
Jonny Z

could you repost steve miro? Tnanks in advance. Nick, Greece.