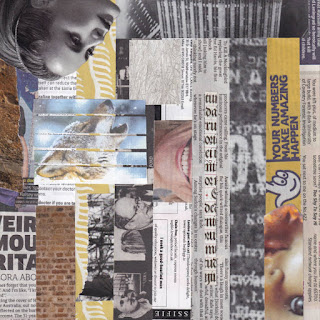 Yet more Nu-DIY with collage artwork,by a pair of weirdo's from dat London innit?
This is the boys'......they have to be male of course...latest album....yes there's more if you sachet over to their Bandcamp page.......you can even buy one!?
The biggest influence on your blog trustee's young impressionable mind was pre-disco Cabaret Voltaire,and their obvious influence on legions of young lonely men in the newly born DIY scene back in 1979 and beyond. We discovered, thanks to the mum's attic loitering Cabs that to make music that was taken seriously,all that was needed was a couple of cassette recorders,one microphone, an echo box,and the cheapest synth you could find.
This all ended when Tascam and Fostex brought out those cassette multi-track machines,and everyone started to sound like Joy Divison or Swell Maps instead of Throbbing Gristle on a bad day.
Home Secretary, do a near perfect facsimile of those ker-azy antediluvian  days between 1979 and 1984, before the flood of competent home recording started to mirror the Sounds Alternative chart.
Cabaret Voltaire themselves succumbed to this over exposure to mid-range budget recording equipment,and started to make their ill-advised  version of Belgian Nu-Beat.....I even had problems with "Red Mecca"!. Home secretary are certainly pre Red Mecca,take that as a further recommendation then graft on some Shadow Ring.
Tracklist:
1.were that what it was 04:06
2.the woe betide 02:26
3.you're doing that now 10:12
4.in Beefs 01:45
5.disappointed 00:52
6.something in his mouth 08:55
7.and how much 04:12
8.why the British army works 04:48
9.Mr Martian 04:08
Get yer free download or yer not free CD-r HERE!

My Name Is John Daker said...

When you're climbing up the ladder and you hear something splatter

I don't think it was necessarily Cab Volt's, or TG's influence. They are the ones that got "big", so that did encourage those who were already doing the same thing, to keep going. When CV got the idea thanks to cheaper equipment being available, they were not alone. Not to say they don't deserve all the approbation they received. Also, not long ago I was stung by a bee.