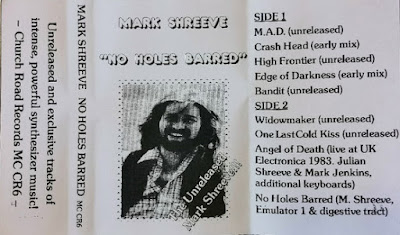 From the less precious end of the recent deaths in music trophy cabinet, comes one of the more 'successful' prime movers in the UK Electronic Underground of the early eighties; as epitomised by such labels as Colin Potters Integrated Circuit Records.
Mark Shreeve left world stage around the end of August this year,but again no one told me!? He features quite extensively in these pages,mainly for his DIY cred rather than his late period plinky plonky electronic Space rock and Jean MIchel Jarre-isms.
This self-released cassette shows us Marks jauntier side,with some largely inadvisable Prog Rock humour risk of recording Farts and Belches;as Roger Waters and Ron Geesin had an annoying penchant for.
Yes, Mark had just bought an Emulator Mark 1 in 1986, and there were certainly No Holes Barred for the prog novelty title track, where Mr Shreeve's Digestive Tract gets an unwelcome credit. Yeah, we all did it as soon as we got our old skool samplers out of their box? The Burp was utilised intermediately,with that generous 0.8 seconds of sampling time at the lowest Bit-Rate ......oh how we laughed....but at least we didn't sample the Dog,as Simon Cowell did early in his career disguised as "Wonder Dog",and his 1982 hit "Ruff Mix"...geddit?
Although Cowell had access to £20,000 quids worth of Fairlight Aampling System to totally waste.....unlike Paul Hardcastles N.N.N.N.N.Nineteen,not?
Sad to say that Shreeve's "No Holes Barred" never cracked the top ten,unlike the previously mentioned atrocities did.
Personally I had to make do with my Commodore 64,equipped with a jolly expensive Sampling module attached at the back for my first sampling experience,which was, you guessed it, sampling a Burp!
This was repeated several years later with a purchase of an Ensonique Mirage.You can't beat the old ones can you?
Well, there was one more Hole for Mark to use, unbarred to everyone, and that was his Grave.In which he now rests his plinky plonky fingers,and has given us all some much deserved peace.
I do however notice, that quite a few of these tracks do seem to harbor an unhealthy obsession with,...gulp... Death, 'the proud brother' as Criswell of 'Plan Nine from Outer Space' fame used to call it....a lot.
Shreeves' early work is rather good actually,if you like Tangerine Dream that is.

I'm really rather looking forward to this. Nicely.

Oh no, just found out patron saint of this blog
Wilko Johnson croaked it. Never knew he was in Game of Thrones
as the mute executioner. Total typecasting...

AAAAARRRRGGGHHH!...Not Wilko,No no NOOOOOO! I'm inconsolable and its all your fault mr Northfieldhat!!.......i'm gonna have to think about this one! I thought Wilko was immortal!?