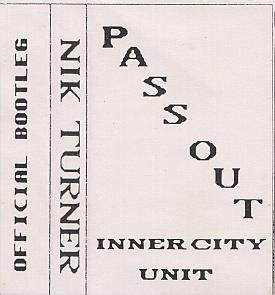 Yes, Nik Turner dies,so a  tribute post is almost obligatory in this day and age when celebrities are treated as friends and family more than yer actual friends and family are......that is,if you have any friends and family,which is doubtful if you're reading this.
I never saw Hawkwind with Turner in the line-up, but i feel as i must make a contribution to the memory of anyone who was in Hawkwind up to about 1980. Although I don't think I did anything for Lemmy, or the electronics one. I figure they were rather important, if the adjective 'Important' can be applied to anything 'Pop'. I didn't even really like any of the albums that Nik Turner was on, other than possibly Space Ritual. I'm strictly a Quark Strangeness and Charm man, flesh and blood.
Hawkwind, in all their era's and offshoots, were.....here we go again..."important"? They had obvious DIY qualities, and,more importantly they had a nude dancey lady with pendulous breasts, so obviously somethings gonna stand up to attention within a teenage boys body....that's right, his Ears!
I thought they were hippies until i saw them on Marc Bolan's kids TV show doing "Quark Strangness and Charm"....and Marc liked them, so that's good enough for me......but, again, Nik Turner wasn't in the group by then! Quiet a disagreeable fellow I hear, was Nik, so he had to go.
Therefore, we have Nik Turners Inner City Unit, who made their own cassettes in their early days, and sounded like one of those trendy 'punk' groups!? Although, noticeably,unlike other 'punk' groups with a saxophone in the line-up, Inner-city Unit got away with NOT being labelled Jazz-Punk, along with X-Ray Spex...and er.....Theatre of Hate?......and Neon Hearts...and....oh, in fact all punk groups with a sax except for The Cravats!?
They did some 'punked up' versions of Hawkwind Classics,such as Masters Of The Universe, and Brainstorm,but don't hold that against them.....leave that for the obligatory 'Punky Reggae' number that ends side 2....terrible.
RIP Nik Turner of ICU and Hawkwind,aged 82 !? That's older than Macca and Ringo!?
Tracklist:
A1 Space Invaders
A2 Watching The Grass Grow
A3 Polly Ethylene
A4 Solitary Ashtray
A5 O. B. City Muse
A6 Brainstorm
A7 Cybernetic Love
A8 Cars Eat With Auto Face
B1 Fallout
B2 Nuclear Waste
B3 Master Of The Universe
B4 Amyl Nitrate
B5 Help Sharks
DOWNLOAD some sax led punkadelia,'cus there ain't gonna be no more of it HERE!
Posted by Jonny Zchivago at 18:47

If you like Space Ritual and Quark try Atomhenge. It's an odd lineup where Bob Calvert is out front with Nik back to skronking and flauting. Probably not the best performance they ever gave but it's not terrible and it sounds pretty decent.

Best intro paragragh you've EVER posted. Thanks man, you're a fucking GOD.

Thanks Steve...yes I am a God.

Anonymous I'll get my facts right if you get your spelling right...deal?

no mention about the Imperial Pompadour "Ersatz", one of the best LP ever !
allez, on t'aime quand même ...

I saw Hawkwind when Turner was in the group, roller skating around the stage and annoying the piss out of everyone else up there by colliding with them and playing all over their solos. Everyone in the audience thought he has great, but if I'd been in a band with him I'd probably have chucked him out too. Having said that, Inner City Unit were a much better bet for a night out in the mid-eighties than Hawkwind were by that stage. Also I met him on a couple of occasions, and he was a thoroughly kind and decent man who had time for anyone. You can't say that of many people, and of hardly any rock stars.
Andy

Hi most often I have my spelling right. As for something else: you had some diy punk/hardcore/new wave from The Netherlands and a lot of other countries. Do you have, by any chance, BGK either with Jonestown Aloha or with Nothing Can Go Wrogn?

I was a follower of iCU as well, and I agree about Hawkwind's diminishing potency and importance from the late-80s onwards contrasting with iCU going from strength to strength as well as Nik Turner's Hawkwind-related groups eg Space Ritual capturing people's imagination much to Brock's annoyance. Turner's since been described as 'The Spirit Of Hawkwind' and no doubt that's gotten under Brock's skin as well, along with the sporadic use of the name on tour in the 21st century - eg 'Nik Turner's Hawkwind', brought to an end in the courts eventually and while I empathise with Brock to a certain degree he needs to let it go. Whatever, we have fond memories of seeing Nik Turner with Hawkwind in the early 80s, roller skates, mohawk and all. He was certainly less guilty of "playing over solos" than he had been previously - and I don't recall seeing him literally colliding with people but I think I know what you mean. Brock or Alan Davey would've walked offstage if that had happened, and Huw Lloyd Langton always seemed happy onstage with Nik, usually a safe distance away stage-right, not fazed at all (unlike Brock), oozing style and playing like a dream. At Stonehenge '84 Nik was definitely the dominant frontman, no question, and you can see Alan Davey and Brock stood together looking toward each other for comfort as Turner and about a dozen ladies clad in white robes perform a mesmerising - if, yes, a little chaotic and ad-libbed - onstage Solstice ritual, to the delight of the crowd. You can't have it both ways, Dave, gaga. And yes Nik does talk over Brock once during an intro but to my mind it wasn't deliberate, it was just a wild show. I get the sense watching the gig again that Brock and Davey wanted to share a kind of dry spotlight banter between songs but it would have been a big yawn...and so as it was, they looked rather dour and denim-y and I'm sure it probably did rub them up the wrong way, you could tell by the glances they exchanged during the set. Well, f*ck em! It was a wonderful set and the whole ensemble was appreciated from where I was standing. This has been the problem all along and ever since between Brock and Turner, a destructive ego-clash, and it's very sad that it ended up so public with polarised fan factions hurling insults online.

Have a read of this post. Pretty interesting, including the comments thread, which seems to have fizzled out in 2021 and obviously now Nik Turner is gone it's done with...you'd hope? Or perhaps Hawkwind central and their fans would like to blame him for global warming and the Ukraine war as well:
https://carwreckdebangs.wordpress.com/2015/04/23/the-demonization-of-nik-turner-hawkwind-hawknerdz-and-the-flame-wars-of-2014-2015/