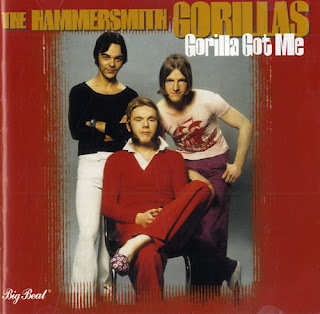 This is what CD's were invented for....surely?....,Primarily so we could get all of The 'Ammersmiff Gorilla's non album work in one place.
If you look closely at the sartorially elegant gentlemen on the cover,you may have noted that two of them were last seen in proto-Punk flag bearers Crushed Butler. Sporting a fine set of muttonchops would be rockin' warhorse Jesse Hector, with the late Alan Butler himself (he fell off a horse),sporting a rather fetching Steve Marriot on heat haircut.
Alongside, Eddie and the Hot Rods,Doctor Feelgood,Ducks Deluxe and the Bishops, The Hammersmith Gorillas helped keep alive the Rock and the Roll for the poor kids who, sadly, came of age post Sgt Pepper, as part of the Pub Rock circuit around 1974,which basically served the same purpose as the Ramones/Heartbreakers end of the arty New York CBGB's/Max's scene; but with a lot more Rock'n'Roll and a lot less pretentious bohemian prancing involved.Out of which sprang forth most of the 'Punk' groups. Basically,the formula reads something like this Pub Rock plus Ramones,plus Glam plus the Sex Pistols management created what was now called Punk Rock in 1976....unsquared. A formula, if left unchecked,or applied incorrectly, will lead to a New Wave of British Heavy Metal....which it did.
The Gorillas,as they were known,in their contracted Punk Rock form,were certainly a mixture of Glam, which had its own more nostalgic revival of Rock'n'Roll going on and the hooligan friendly Slade inspired Bovver Rock of the pre-punk period.
These chaps certainly know their Rock history,selecting to cover the two main precursors on how to be a punk Rock group,namely "You Really Got Me" and "Wild Thing"....that's where the seeds were sown,maybe cross-pollinated with a bit of "Johnny BeGoode" and "Louis Louis",from here sprung hither the mutant.
Whatever, the Gorillas had great Haircuts and recorded for legendary Punk Label Raw Records, straight outta Cambridge.
Tracklist:

Bloody Nora! 'Bout time, me old mucker! Just kidding, but it's true, i have been waiting for this like a kid on Exmess Eve ever since you said, "up next". Today's the day i play da Gorillas (not the fucking Gorillaz, thank christ) at a volume gyaeanteed to another the neighbours' neighbours. Many thanks to you, Jonny. Got anything else in a similar vein?

There's the solitary Gorillas album on Raw Records 1978 coming up,not as good as Gorilla Got Me,but yu know.
I assume you've waded through all the pub rock stuff on here....thats similar i guess?
Njoy.

I never got behind the pub rock scene really. A bit tame for my tastes. I was spoilt early - i got into the Pink Fairies, Hawkwind etc at an impressionable age and all that 'good time rock 'n' roll' - Ducks Deluxe, Kilburn & the High Roads, 101ers etc - left me cold. It was like shandy after the Tennent's Super of albums like Space Ritual Alive, What A Bunch Of Sweeties or Mötörhead's debut. Perhaps now i'm an old codger i might appreciate it better though. I might have a look at the Count Bishops - some of their singles were okay.

You've been so good to me lately, Jonny, that i can't not share this with you - if you're interested, over on guitars101.com (the 'lossy' section) somebody has just posted several Pink Fairies radio and live sessions from the early 70s/80s. Me, i'm in hog heaven, what with this and the Gorillas.

Was thinking of doing some Pink Fairies as part of we had our own influences and invented our own punk rock and it was more popular than yours thanks americans series,but decided against it.tooo obvious.Same goes for Edgar Broughton deviants.....i dunno...watch this space....will check out the fairies radio sesh and live.
Hog Heaven?....hmmm the groundhogs?yes.

I’m slightly too young to have really got into punk rock, but bands like Pink Fairies and even to a certain extent Groundhogs (I’m thinking Solid era) probably had an influence on UK punk bands. Marc Riley (ex Fall now DJ) is very keen to say how much he loves The Groundhogs every time he plays them on his Radio6 radio show.

In retrospect the punk bands I liked weren’t punk at all, Magazine (prog), Stranglers and Penetration (rock hybrids), and a few years later Black Sea era XTC (xtc and genius).
The discussion of who were the first to play punk is obviously very debatable, Lydon has mentioned liking Peter Hammill and Hawkwind, but just like NWOBHM, surely young bands if they were playing gigs just thought ‘lets stop playing all these blues based or rock n roll covers and just try doing our own stuff’, and punk was born.

I remember around 1979/80 going to see local (Dorset) pub bands churn out the same old blues/rock/soul and a bit of folk occasionally, and it got very boring very quickly - I never want to hear Mustang Sally ever again because every band seemed to play it. The people going to see these pub bands aged from 16 to 60 so I guess the bands had to try to cater for all sorts and ages. Soon a few local rock bands started playing their own heavy rock with a few covers too fill out the set, but it suddenly felt like ‘our’ music, and a couple of them got a really good young following, one band called Truffle even put out a 7” single, which is now a NWOBHM rarity. But just like punk, NWOBHM also has a lot of ’sub par’ music released, while the record companies jumped on yet another bandwagon - see also the post Marillion prog revival. Of course many of these labels have huge overlaps, just thinking about The Pink Fairies, their music is pastoral folk, punk, rock n roll, heavy rock, blues, comedy and prog - add whichever genre label I’ve missed, maybe not disco though.

Anyway I really like your blog Jonny, including the comments section, shame about Sandy and her lack of interest in discussing the music though.
Keep up the good work, just a thought The Enid, DIY?

I think Sandy (calling him 'her' cracks me up, i love winding up bigots) should be given her own section.
The Groundhogs were a fucking great band. I love Split - a classic album. Yes Jonny, you should do something with them.
I used to get a lot of stick back in the macho 70s (when i was a 'headbanger') for having a denim jacket with 'Pink Fairies - What A Bunch Of Sweeties' emblazoned on the back. My favourite 'terrorist drinking club', as Mick Farren called them.
Loved the Crushed Butler, by the way. I'm saving the Gorillas for after the Pink Fairies sessions. Keep up the good work mate.