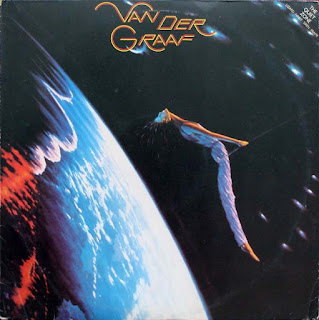 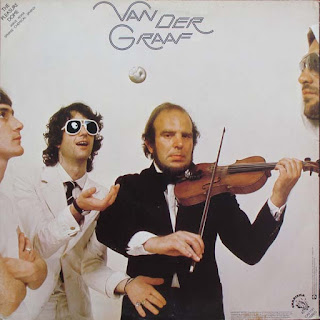 It seemed in 1977, that older groups,such as The Broughtons(previous post)being tarnished with the skidmark left behind by Emerson Lake and Palmer,seemed to think that if they truncated their band moniker,they would be both recognised by their former audience,yet accepted as a new band by punters of the new wave.
What usually happened was they found themselves rejected by both,leaving a bargain bucket filler and having to pay back a massive record company investment.Charisma's confidence was fueled by John Lydon singing Van der Graaf Generators praises on Capital Radio.Which i hear he has recently back-tracked from after reading that certain Van Der Graaf personnel have lain claim for 'inventing Punk Rock'?? Er....No. Making supremely Dark Progressive Rock, yes,but Punk Rock,perhaps...er...Not!
Despite Peter Hammill's noble attempts to look a bit new wavey,the rest of the band gave it away by looking unapologetically 'PROG'! Alongside the guy from String Driven Thing on violin,looking like Captain Ahab as re-imagined by the London Philharmonic,after backing Deep poop-ple and Prick Wankman (nah, hes a good bloke really),was not a help either.
Of course ,this album bombed,even in Italy where they are Gods.
Having not heard any VDGG before, I found this in a pop-up scond-hand record shop in the brutalist concete underpass near my dreadful school in 1982-ish. Quid-fifty(?),can't be that bad. Played it while doing an analytical synopsis on Gustavus Adolphous and the Swedish empire (yes they had an empire???) for my History A-level,which is the kind of stuff that most Prog Rock bohemoths sing about in their songs,that usually come in sections so that they can get more royaties by having more tracks on an LP....technically. This behaviour was ruthlessly frowned upon by the Punks,so no sections on this LP,just nine shortish,for VDGG, tracks.
But all things Gustavus could not obscure the fact that I hated this terrible album.Sounding like some horrible proggy musical,with lyrics written by a morose Tim Rice,who may or may not have been an old boy from one of Van Der Graafs public (or private if american)  schools.
The Public school problem in Prog would not have helped my opinion none,as we Grammar School types despise Posh kids,as well as working class kids....so That's Genesis fucked then? We poor streamed scummers grew up ostricised by our working class scum peers, and ignored by our upper class bastard superiors.
Talking'bout Royalties,I'm not really a republican, but watching the 10 mile long queue in London to view the Queen's coffin today,as saw on the BBC news live feed, I wondered where was the queue in the liberated parts of Ukraine for the newly exhumed mass graves?...which was on the brief 'other' news section after the overwhelming weight of the Royal Family in Mourning propaganda/advertisement that is dominating the airwaves of the world......the Russian Delegation have not been invited apparently,even after Putin sent his heartfelt condolences.A joke that definitely isn't funny anymore.
It took me a few years to force myself to get into VDGG,and when I did,that obsession gene that we on the autistic spectrum,took over.Couldn't listen to anything else for six months or so,loved it all,and Hammill's Solo work up to the Post-Punk Enter K,Black Box and PH7 etc era's.So deliciously dark and doom laden,and one of the few lyric writers to encapsulate my Depression in the medium of popular music...I wanted to say 'Dance (Dahnce)' because it's funnier......OMFG I have to embed that video of Jimmy Pursey expressing himself through the medium of Dahnce again....its worth it:
I may be depressed but i'm Happy,especially after that ,James?
However,still didn't garner much fondness for this punk-prog straddling abortion......bit harsh there but i liked the sound of it....yeah it's alright,just not very good 'tis all.
Haven't put you off have I?
Tracklist:
The Quiet Zone:
A1 Lizard Play 4:28
A2 The Habit Of The Broken Heart 4:34
A3 The Siren Song 6:01
A4 Last Frame 6:12
The Pleasure Dome:
B1 The Wave 3:12
B2 Cat's Eye / Yellow Fever (Running) 5:20
B3 The Sphinx In The Face 5:58
B4 Chemical World 6:10
B5 The Sphinx Returns 1:12
DOWNLOAD quietly for your pleasure HERE!
Posted by Jonny Zchivago at 22:38

Its ok,i'm still to get over the repulsion or misunderstanding i felt when i bought it as a teen.....now i'm fully conversant in all things VDGG I appreciate it more. To be seen with any prog album in 1977 was dangerous.
But then again i was attacked by a bunch of Soulboys for having a Devo album, basically you couldn't win during the peak of UK Youth Culture. Everyones so fucking eclectic these days.
The doom and gloom was always influential for me.....but it really does all sound like a bad musical if you take a step back...or rather a superior musical to be more accurate.

I’ve known a few people over the years who liked VdGG’s music and approach but found Hammill’s histrionics too much to handle. I see the point but I’ll always be a fan of bands that know what to bitch about and how to do it with flair. Peter certainly excels in the regard I was a bit taken aback by John’s endorsement back when he was still rotten but had no real issue with it. In any case, I can imagine how dreadful this album must have sounded coming from the punk/new wave side of the spectrum. I think PH was inspired by punk and frankly it was past time to jump the prog ship by this time, seeing that most of it had already foundered. I guess the band still works in a style that could be seen as prog, minus the fantasy fairies but retaining the odd time signatures and sometimes complex arrangements. I think their more recent Trisector album is pretty swell.

As for today’s pomp and pageantry, as with 9/11, I slept through it all. Certain “historic" events are best experienced absent.

PS, agreed, Hammill/VdGG are expert in triggering the obsession gene. It’s all a plot I tell you, a plot.

Hammill/VDGG, also made me a bit obsessive about them. During the 80's I started buying their albums secondhand, in those days they were very uncool, so their albums were affordable. One called 'The Least we can do is wave at each other' had very neat A4 hand written lyrics to all the songs from the album, inside another album the printed lyrics had been underlined in different coloured felt pen - very obsessive behavior.

I liked the Nadir album, but then a lot of times with Hammill, I just forced myself to like it. This didn't work with his album 'In A Foreign Town' from 1988, the production/instrumentation is just awful to these ears.

Pursey...Some guys will do anything for a woman

northfield...do you think the thing that Pursey is doing for a woman is the same thing that Meat Loaf wouldn't do ,as last heard in the international hit song which expressed similar sentiments?