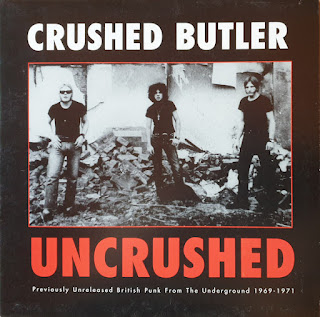 Even before the members of the Ramones or Dead Boys were born,'We invented Punk' candidates ,Crushed Butler, were having their photo taken amongst scenes of devastating Urban decay ,and bombsites left over from the Blitz.
Including Brit rock's most rockinest under 25 equivalent of Iggy poop, Jesse Hector, Crushed Butler were making balls to the wall basic proto-punk when three quarters of the UK Subs were still in nappies.Recorded in glorious Mono,these demo's obviously never saw the light of day until the search for the Holy Grail of embryonic Punk began in the 21st century.
Of course, anyone old enough to have gone to see Bovva Rock leg-ends Slade, Mott The Hoople,or even the punk metal myth made flesh  Atomic Rooster, will remember that brutal trio who opened the evening on many such occasions in 1971. Equally, anyone who remember those sweaty weeknight pub rock extravaganza's at the Hope and Anchor in 1974, or the Punk Rock nights at the same venues in 1976, will have noticed that the two blokes in Crushed Butler with the funny haircuts and lambchop sideburns were those geezers in historic Pub /Punk crossover trio The Hammersmith Gorillas; whose top tune "It's My Life" was first unleashed by the Crushed Butlers in 1969....included here.

They were around slightly before Third World War,and The Pink Fairies , and other worthy 'we invented (UK) Punk' candidates; but after the Deviants and Edgar Broughton, although musically,and visually, they tick more boxes probably,than a few of their bluesy rivals.....retrospectively of course;back then they would have been called Hard Rock,or what we sad 21st century bastards have labelled 'Bovva Rock' ,exclusive to the Uk,conjuring up images of the boots and braces football following Bovva Boys of the early 70's. Something that carried over into Punk Rock exemplified by those Mick Ronson devotees of Pistols in Manchester support act fame...Slaughter and the Dogs, who even wore football scarves at gigs!?
Football fans still sing Gary Glitter's anthemic bovva boy stomps at matches to this day....who cares of he's a paedo,he was one of the boys back in '72! The golden era of the boot boy and footy fandom;before they made us sit down and put us in cages....sometimes electrified (Chelsea did that!)
If ever anyone wanted to sing a Gary Glitter song in a dense electrified atmosphere of pure malevolence and Hatred, other than standing naked in a queue for the showers in a Nazi extermination camp.Then going to a football match in the 70,s and 80's was the place for you.There was lots of space for pure hatred to fester on the terraces,as no-one 'normal' ever went.
This is what the UK media thought going to a Punk gig was like in 1977......not far off actually.
It's complicated innit?
PS....was it a pub myth that at a certain football match in the blue side of Manchester,around 1980,some clever chap started a chant, directed at travelling supporters,which went something along the lines of..."You're going 'ome in a Crispy Ambulance"?
Or was that a Half-man Half Biscuit song?
Probably post-fact Mandela syndrome stuff, but fun all the same.
Tracklist:
1. It's My Life
2. Factory Grime
3. My Son´s Alive
4. High School Dropout
5. Love Is All Around Me
6. Love Fighter
7. High School Dropout Ver. 2
DOWNLOAD the crushing reality of who invented punk rock HERE!
Posted by Jonny Zchivago at 14:19

Nazis NEVER had extermination camps! FACT. Yanks had gas chambers, Russians had Gas death vans, Nazis had labour camps which were badly organized like the infamous Boer war camps or US civil war camps, the fact that the allies bombed the supply lines to the Nazi camps was the main problem hence typhus killing the vast majority of inmates.
There is no proof of Nazi gas chambers, only lies told by anti-German jews, who have become extremely rich on the Shoah-Business, just like there is NO proof of viruses only lying scientists who are bought and sold by industrialists to take the blame from them - people get ill from pollution, contamination and jabs, more Jew owned businesses, Rockefellers own Big Pharma, politicians and 48,000 other famous/top companies in the world, including in China and Russia (always good for controlled opposition now the phoney terrorists and Nazis are yesterday's news).

Oh boy, I'm looking forward to this. Jesse Hector was the frontman for the Hammersmith Gorillas too. They released a few singles around '77/'78, including a verrry crunchy cover of 'You Really Got Me' that i still play occasionally. I vaguely recall some music rag - 'Sounds'? - doing a piece on 'bovver rock' or something like that, years ago. Probably around the time that Earl Brutus released 'Come Taste My Mind'.
I hope i'm not putting my foot in the "ahh, gotcha!" trap here, but the HMHB song is 'You're Going On After Crispy Ambulance'.

Ah, that's me reading too quickly. You mentioned the HGs halfway down. Oops.

You are a very nice person. Ask around. Everyone loves you.

Ahhhhh, the return of my most beloved commenter Sandy Hook.
We've all missed you and your lovely abstract logic,backed up by foolproof fact finding and irrefutable evidence gathering. We love you......but you never have anything to say about the music, which saddens me.

Mr Field Hippie,...I suspect a trace of sarcasm in your sycophancy,but none the less I love you too...even more than i love Sandy Hook man.

Ritchie.....HG gaff accepted...HG up next.
And I prefer my version of the Crispy Ambulance chant.

If Sandy wants to troll, she needs to learn how to do it properly. The stink revealed itself too early on, in her handle, so I didn’t get beyond the first few words. All that typing and ‘research’ in a futile attempt to provoke, engage or offend and here I didn’t bother to read it and as a result don’t give a fook. All that effort wasted, there’s the pity. I can see why she’s a favorite ‘round here.

Deliberate or not, calling Sandy 'she' has made my Sunday. I shouldn't stereotype - Ilsa Koch showed that women can be psychopathic monsters too - but in all likelihood Sandy will be some treble-chinned, bespectacled loser in a MAGA hat, sporting a five day growth of bumfluff and crusty semen-stained grunts. He - yes, he! - will be coughing in pizza-crumb rage and fostering an early coronary at being categorised as one of the 'weaker sex'. Right, Sandy? You can 'fess up, we'll still read your well-researched and fascinating treatises on those much-maligned National Socialists you have a semi for.

Awww,That bit in Downfall when the character called Hitler I think, shot himself in a suicide pact with his true love,except, the twist out does Romeo and Juliet and they both snuff it at the same time, and get cremated on the same day......always brings a tear to my eye does that. Best fictional characters this side of jack and Rose in Titanic.But of course Miss Sandy Hook will say there was a secret cargo on the Titanic that's why the Illuminati had her sunk with a remote controlled iceberg...which is impossible because the Titanic was an inside job thought up by The Bushes who own the bildeberg group....so in effect it was sunk by a bildeberg! facked!

What if Sandy Hooks is actually the ghost of Sandy Denny--or, egads, even Sandy Dennis? I just don't know how I'd respond to that.

Parmalee....i think i'd start crying,and beg Sandy Denny forgiveness for calling her 'Randy Sandy' in one of my synopsis'....the incoherent politics sound like her?...has anyone tried doing a seance on Zoom?

Thanks JZ for Crushed Butler.

The Peter hook massacre is never mentioned izzit?....yeah, those poor Nazi's.
Hooky is a bit of a twat, but then again who would you want as a friend who isn't a twat. I'm a twat too.

Well, Hooky probably does want to murder Barney Sumner, but who can blame him.