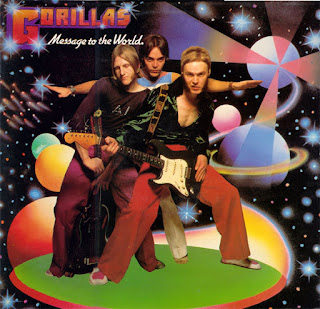 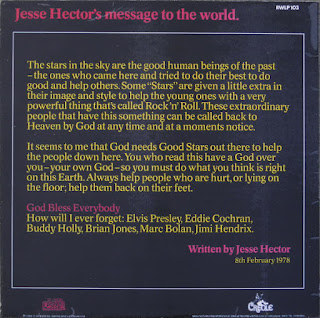 Jess Hector's 'Message to the World, as printed on the back cover to their/his only official album release in their lifetimes, has been ignored,as has this rather over-produced dee-rocked debut and final album by the Gorillas, formally the Hammersmith Gorillas who took their name from London's pro-Castro activist group the Hammersmith Guerillas.....although i suggest that Jess and the boys probably couldn't give a fuck about all this anti-human political bullshite......hence the piss-take replacing Guerrillas with Gorillas?
Jesse has his Marc Bolan warble center stage on this one,even managing to remove all the Funk from Hendrix's "Foxy Lady" as made by late period T-Rex....sounds good on paper.
All his hero's were dead, even by 1978, so whats a boy to do but try to resurrect their souls using the new age Voodoo that is Rock and Roll?.....it didn't work, Hendrix is still very dead,as is the wonderful Marc Bolan,whose kids TV show , "Marc" was a primary influence on the young Zchivago.It had my second experience of Punk Rock on it, Generation X, Eddie and the Hot Rods...who everyone thought was 'Punk', and why the fuck not? They were faster than the Ramones,and no Glam influence either.The Jam,the LP of which (In The City),my sister had,so I nicked it.....their best album by far.
Marc's old mates The Radio Stars were on it, i thought The Boomtown Rats were good????......can't win 'em all?....but best of all was Hawkwind,in their punk phase with "Quark Strangeness and Charm"...a classic.
The series and Marc's life ended with a ramshackle duet with David Bowie....his last performance before his wife,The Tainted love legend Gloria jones, drove their mini into an old sycamore tree near Queen’s Ride in London. What delights has this tragedy deprived us of,one could only guess.He did ,however, write and record the same song over and over again....but what's wrong with that if it's a Good'un.
An interviewer once asked Angus Young of Aussie Pub Rock legends AC/DC why they had made the same album ten times over?
He replied thus, " I find that quite insulting, its the same album Eleven times over actually,get yer facts right mate!.
I'm certain that Jesse Hector wouldn't mind at all that my blurb is all about Marc Bolan rather than him.We can't all sit among the elite in Rock'n'Roll Valhalla can we?
Tracklist:
A1 Foxy Lady
A2 I'm A Liar
A3 I Need Her
A4 Going Fishing
A5 New York Groover
B1 Outa My Brain
B2 Waiting For You
B3 No Way In
B4 Last Train
B5 Message To The World

hi! I put your blog in my blog list (https://sintrabloguecintia.blogspot.com/)

Another youthful T. Rex fan eh? I got a lot of stick off my Zep-loving classmates for being a Marc fanboy. He could do no wrong for me up to (and including) The Slider, with a big shout out for 20th Century Boy of course. A classic slice of proto-punk if ever i heard one.
I wasn't a big fan of Eddie & the Hotrods, but their 'Live At the Marquee' ep was a belter to equal The Motors' 1st album (and what a travesty they became. When i heard Airport for the 1st time i could've spit feathers.)

Ritchie....i bought the Motors second LP from a boot sale in France the other week...seems they were big in France.....we used to laugh at the motors,and sing Airport satirically in class during the punk wars of 77/78....but there seems to be a 1st album outtake on there that sits like a shining wart amongst the synth pop and desperate hit making numbers that make up the rest of the record,"You Beat The Hell Outta Me".....love the cover though,thats why i bought it.They look like they were characters in Mad Magazine in flesh, very ugly buggers.

Ritchie again...I like Dandy In the Underworld best,then futurist Dragon. I do have the next unreleased album with working title of 'Jack Daniels' interesting.We punk rockers loved T-Rex,especially as he had The Damned supporting him on his last tour.
Led Zep = fucking shit.

Yes, the Motors were a bunch of bowzers, although curiously, watching them gurning away on OGWT as they played 'Dancing The Night Away' enhanced my enjoyment of it - at least they seemed to be genuinely into it, as opposed to bands pulling those heavy metal tosser faces you saw a lot of back then.
You may be a slim wafer biscuit younger than me, Jonny - my first 'proper' album was Electric Warrior (before that i could only afford those awful 75p TOTP affairs.) By the time 'Children Of The Revolution' was released i was finding the formula a bit worn. That said, if you were of a mind to put the later stuff up i'd appreciate it. I'd like to give the little elf another chance now i'm of an age to appreciate it - i'd deffo be interested in the Jack Daniels too.

I am asuming Ritchie, that you have already checked out my Motors posts? Including peel sessions.

Top of the morning to 'ee. Yes, I felt a stirring in my loins when i saw that you'd put the Peel sessions up - that's second only to finding the OGWT sessions for me (something i've tragically failed to do, as yet) - and was instrumental in me exalting your blog to all and sundry. I couldn't for the life of me deign to take their 2nd album though - i'd sooner eat food recovered from an autopsy, it's that bad. I've just downloaded 'Strange Man, Charmed Man' on your say-so, despite having taken a live show of his from guitars101 and finding it not to my liking. 'Fraid to say, i found that whole power pop thing total pants, back in the day, and haven't heard anything to change my opinion of it as yet. 'Motors 1' is the LP Status Quo wish they'd recorded - a balls-out classic - and sadly, a singular achievement by any of them.

Glad someone else likes The Motors first album. There's a whole sub-genre of pub bands gone punk that I quite like. Most of them like the Motors or Vibrators went to complete pooh after their debut albums. And some, like Costello, kept up the pose for a little while longer.