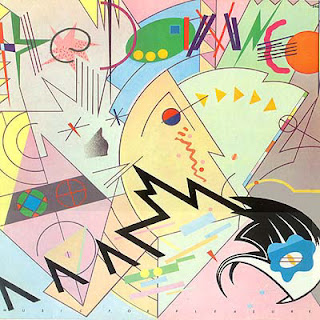 Now for number 2 in the terrible 2nd album by original wave UK Punk groups, the much maligned "Music For Pleasure".
The story has it that the zanier half of of the group wanted Syd Barrett to produce the follow up to their near perfect debut on Stiff, "Damned Damned Damned";but the nearest the management could get was the Floyd's drummer, Nick Mason, who seemed to not be interested in music at all,even as part of one of the biggest bands on the planet. This could also have been a reposte towards the Pistols' "I Hate Pink Floyd" DIY t-shirts, as an expression of Punk envy. The Damned were always thought of as the Other Punk group,in a poor third place to the Pistols and The Clash. Captain Sensible,did however beat Lydon to outing his own Prog Rock credentials , as a life long Soft Machine obsessive.He and his proggy mates used to stalk Mike Ratledge dressed as...... Mike Ratledge,including the hair. However , as Ray Burns, he was in the most proto-punk of all proto-punk bands The great Johnny Moped band,along with, of all people Chrissy Hynde......I notice that this wasn't mentioned in that rather daft TV series "Pistol",where apparently Chrissy was the very talented lover of the illiterate pistol,Steve Jones.When in fact she could hardly hold a chord down as a member of The Moors Murderers and the Johnny Moped band.
What the Damned expected Syd Barrett to do behind the controls when everyone knew he could hardly talk never mind leave his Flat I really don't know? I doubt he was even aware of what was happening to the UK music scene either.
Only slightly better,Nick Mason was at least 'normal',and had some clue about what Punk Rock was,which is obvious when listening to his production job on this album. He's opted for the raw rawk'n'roll angle,as if captured 'live', and to a certain extent he succeeded,as these songs sound like a very lifeless,medium slow set of Demo's.
The songs seem to be rejected leftovers from  Brian James's time in the London SS,with ambitions towards some kind of Yob Metal,supposedly why unnecessary 'fifth' member Lu Edmonds was added to the line-up,to add more meat to the riffs.He does seem to just play exactly the same chords sequences as Brian does.Good live but pointless in the studio,but at least it allowed James to do his short solo's without stopping the riffage.
The mix does sound as if Nick Mason was actually deaf,which was highly possible,with it's horrible mid-range dominant  EQ mud....a common problem shared by second album Adverts it seems.
I suspect that Mason had done his punk research by playing The Clash's debut,took notes then tried to impose his version,noting the basic production values....trouble was the group wanted to make a hard rock record like The Clash's crisply over-produced follow up was to be.So, probably some brownie points there for the Floyd drummer;even though he was likely dreaming of cars rather than concentrating on the job.
I played this uncomfortable record a lot back in the day,and never thought it was as awful as the revered British music press,and Stiff records thought it was. It was only £2.50 after all, which cushioned the disappointment, and my schoolboy income........the bank of mum.
In comparison to the debut album, this record pales in insignificance,but when compared to the albums they released in the eighties,its a punk rock masterpiece. (I suppose Machine Gun Etiquette could join it in joint second place I suppose?)
The ears do get some relief with the bonus tracks, notably "Sick Of Being Sick",the B-side to "Stretcher Case",which must have been recorded at Pathway studio's, with Nick Lowe (it says Shel Tamy on the label)It has that first album sound,which would have been better served as the A-side..It was certainly not Nick Mason anyhow.He'd long gone,speeding off in his classic British sports car back to his mansion in the countryside,to indulge his car obsession.
Tracklist:
1.Problem Child 2:12
2.Don't Cry Wolf 3:13
3.One Way Love 4:23
4.Politics 2:25
5.Stretcher Case 2:32
6.Idiot Box 5:39
7.You Take My Money 1:59
8.Alone 4:15
9.Your Eyes 3:30
10.Creep (You Can't Fool Me) 2:14
11.You Know 5:02
Bonus Tracks:
12.Help 1:46
13.Sick of being Sick 2:32
14.Singalongaacabies 0:59
DOWNLOAD for your pleasure HERE!
Posted by Jonny Zchivago at 11:19

Sick of Being Sick was definitely produced by Shel Talmy! He also produced a superior version of Stretcher Case (not included here). They were released as a giveaway 7" when they played the Marquee in summer 1977.

If that record had been released properly they would no doubt have had a decent sized hit. But instead they missed the boat and the follow-up was the dire Problem Child. Doh!!!!!

PS The moral of that story is surely: NEVER do anything nice for The Kids!

Seems Speedy Keen and Mr. Mason competed for the top spot in the dismal production honors, helming the Heartbreakers' L.A.M.F. to similar effect.

Ah yes, L.A.M.F.
apparently the cassette mix was good.Then there were all those awful remixes done by idiots like that bloke from Generation X Tony watsisface.
I reckon they should release a version where us kids can remix it to our own tastes, like the Residents did with Eskimo.
Might post the cassette version next and discuss it, like a muther fuker like I am.

After so many false dawns, a "proper" version of LAMF was FINALLY released last year and it sounds great. Full story here: