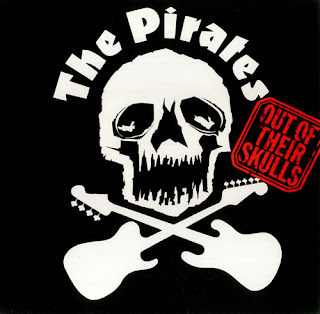 Well, if Dr. Feelgood were the Flying Squad in the Sweeney, then The Pirates were the villains. They looked well mean and menacing. Johnny Spence, the bass player, had a glare that could turn me to jelly! And drummer Frank Farley looked like he could tear your arms off at any second!
As well as being the great Johnny Kidd's backing band, the Pirates were the main inspiration behind Dr. Feelgood, donating the name from one of their songs, and guitarist Mick Green being responsible for developing the lead/ rhythm guitar style that Wilko Johnson would model his own style on.
Mick Green was therefore also responsible , through Wilko, for Andy Gill from the Gang of Four;whose tendrils stretched to the less proud grandchildren, Red Hot Chilli Peppers.....scheeesh....Mick would be turning in his grave!
With the rise of the Feelgoods, an opportunity arose for the classic Pirates line-up to reform and show these jumped up Pub Rockers how to do it.
So with this New wave of honest dirty rock'n'roll, The Pirates found a new and appreciative audience. Frequently supporting a number of the early Punk bands, where their balls to the wall aggressive R'n'R went down a storm with the kids. These chaps looked, and sounded, like the real deal, with their 'Don't Mess' image and electrified Live performances.
Having no clue who the Pirates were, I saw their pictures in the Music press in 77/78 and thought these guys frighten me more than the pale pussies of the Pistols,Clash and Skrewdriver put together, and then some!
Then upon hearing "Out of their Skulls" and that razor sharp clean guitar violence of Mick Green, and the brute force of their music I was definitely hooked.
Side A captured them live, crackling with sweat and electricity in legendary Pub Rock venue The Nashville Rooms, in those heady days of 1977.
Side B, the studio side, lacks a bit of the intensity, and an audience, but is still pretty rockin'.they were definitely at their best in a live situation.
They also reintroduced the planet to that Brit Rock classic "Shakin' All Over", penned by their previous employer Johnny Kidd. Despite the fact that this line up of the Pirates didn't play on that recording, these were the boys that Fred 'Johnny Kidd' Heath gave the blessing to record using The Pirates name. Although his original name for the band was going to be Fred Heath and the Nutters, which I quite like?
I have a funny story about the recording of "Shakin' All Over", but i'll save that for the Johnny Kidd post after the Pirates classic records, its a good one.

Cool. Here's hoping the version of Out of Our Skulls you have includes the slide guitar part on "Long Journey Home". The vinyl copy I owned had that version; the only digital versions I've heard don't have it. I don't think it was different versions for U.S. and U.K. I've never known the deal on that one. Perhaps someone with knowledge can enlighten.

Oh yes: when the pint glasses start flying, I want these guys on my side.

Oh by the way, "Long Journey Home" was on album two, "Skull Wars".I think it has the slide guitar you were concerned about...now available for download after this post.

Awesome - bought this album when first released and really dug their live material. Can't believe I sold / traded this gem in in later years.
Thanks for bringing back the memories and this great music

I was at a Pirates gig in London, some skinheads decided to launch an impromptu attack on the audience near the front. Frank came off his kit and swiped at them, with one swipe of his arm he sent about 15 skins flying backwards! Johnny lassooed the biggest skinhead with his guitar lead and strangled him so hard his face turned beetroot purple. Then the group all went for a saveloy and chips and turned up at the local hospital where the skins were being treated, and gave them some more 'treatment'...with a claw hammer and a lighted cigar!!!

I was at a Pirates gig in Bournemouth and some hippie who'd travelled down in a camper van slapped a young female Pirates fan in the face and split her lip, after she refused his advances...the Pirates found out about it, broke into his van at 3am, dragged him out still in his sleeping bag, weighed it down with a tonne of bricks, put a padlock at the top of the zip and chucked him into the sea!! He's probably still out there!! You DID NOT mess with the Pirates.

Yeeeeeessss!
Great myth hardening recollection.
They don't make 'em like this anymore.
Thanks.