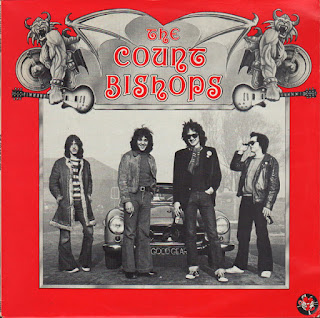 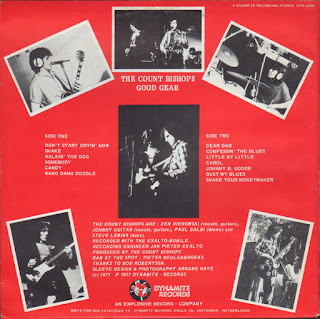 DOWNLOAD and get your arse into gear HERE!
Posted by Jonny Zchivago at 10:27

Enjoying the Count Bishops, I'd never known about them till now. Thanks. The cover shot of the band around the car is reminiscent of the one on the back cover of Sharks' First Water LP. In fact the CB's are almost dressed identically. I recall seeing a crowdfunding effort recently by someone who aims to rebuild the "Sharkmobile" which reportedly Chris Spedding crashed at some point. Hard to fathom there'd be enough people who were even aware of that car let alone share an interest--and money--to restore it. But hey, high marks for the effort.

The Sharks?....had to look that one up.
Yes, cool looking dudes,the photo on the back cover is almost identical....but set at what looks like Beachy Head on the uk south coast. Also a location for another similar LP cover shot for Throbbing Gristle's "Twenty Jazz Funk Greats", with Range Rover and dodgy clothes included.

Teachin' and old dog some new tricks here, and I'm lovin' it. And, I want the sharkmobile....
KUDOS! DoD