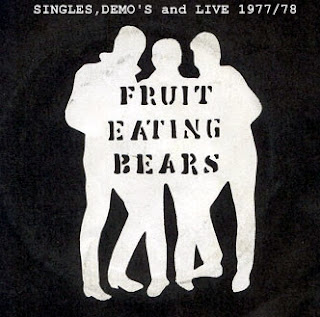 Once described as a South London Charity shop Ramones, due to their standard garb of leather jackets and t-shirts. The Fruit Eating Bears are a fine example of Pub Rockers embracing (or exploiting) the Punk Rock sound and merging it with their own sixties R&B sound. Not unlike The Pirates, but without the raw meat.
They even donated a tune for Mick Green and the boys, who did a version of the Bears' own "1.30 2.30 3.35"; which they wrote for Lew Lewis.(The recording here has exactly the same backing track that Lew used!)
There is a strong element of bandwagon jumping in their sound.That tongue in cheekiness kind of fake punk that The Alan Milman Sect carried off so successfully.I suppose the Fruit Eating Bears were a paler version of that, but in a Pub Rock stylee.
However their main claim to fame, and the first time I saw them, was as a surprise entry into the UK heats of the Eurovision Song Contest in 1978.A lame concession to the passing New Wave fad by the BBC i wager. I of course announced "Door In My Face" as my favourite to my mum, and it finished 11th out of 12 songs. In hindsight it was by far the best song naturally.Check out the video below:

DOWNLOAD the only group with a eurovision entry on this blog HERE!
Posted by Jonny Zchivago at 02:09

Hi, me again. I hope I don't comment too much. In fact I would do it much more if you had anonymous comments activated. Having to open my google account is usually a drag :D So that will stop me from invading the blog ;) I mean, this pub rock series you've been mading is terrific, I would comment most of the posts, I'm afraid it would be too much.

About this band, I see the winners in the Song for Europe contest were a band called Co-Co (like the Sweet bubblegum song? they even have the same hairdos...). Don't remember them. I remember the Spanish entry for that year in Eurovisión, José Vélez. Oh my :D

It looks like the collection has some cover versions at least judging from the titles. RIchard Hell? Love? Beatles? Oh, and about Indian Giver, are you sure it's a self penned tune? There was a hit by 1910 Fruitgum Co. with that title, it would be no wonder that the fruitgum eating bears ate that one too ;)

Thanks a lot for the comp!

Hi, no we encourage commenting......anonymous isn't available because of some idiot trolls, so i'm sorry to say you have to sign in these days.
As for Indian Giver I read somewhere that they wrote it for The Pirates....so can't vouch for the accuracy of that info!
I don't remember Co-Co or the spanish entry for 1978's Eurovision....this may be a good thing?

Excellent stuff on this ...heard a couple of tracks in the distant past,one of 'those' bands I would've scoured the record shops for if they'd managed a few more obscure vinyl releases .... good to see some early stranglers stuff included in the pub rock theme, no eddie and the hot rods yet? i used to pride myself on the fact i had a couple of first singles n noone else had heard of em,but everyone could quote dr feelgood's 'milk n alcohol' word for word ...'top of the pops' generation - legs and co for me, pan's people were just hippies :)

Don't worry, Eddie and the Hot Rods are one of my fav bands ever....seem them more times than any other group ever, so there willbe be something appearing.
Yeah, stranglers...Pub Rock or what?
Legs and Co....not bad. My favourite top of the pops moment was when Legs and Co. danced to 'Bank Robber' by champagne socialists The Clash. A subversive moment.
What about Ruby Flipper?
Of course Dr. Feelgood beats The Rods in my preferred bands top ten.One of lifes great tragedys is that i never got to see classic Feelgoods live.

Aye pub rock stranglers & the bromley contingent! they must've had more strippers on at gigs than one could see on a sunday in dalston (i lived in dalston n stripper joints were there many):) ... best (worst perhaps)legs and co has to be with them dancing to the s'ex pistols silly thing ....champagne socialts the clarsh,yup sums it ... joe strummer once said he cared but never really gave a ..... !

Hi!
Today I'm connected w/my goo-girl account so it's time for an update: yes, Indian Giver is a cover version of the 1910 Fruitgum Co, so I wonder how the Fruitgum Eating Bears could have written it for The Pirates? :D Use only reliable sources! :D

About the other titles, well, these Bears's (there were other Bears who appeared in the Farewell to the Roxy album if memory serves) "Love Comes In Spurts" has a Richard Hell stolen title but the song is completely different. The Love and Beatles titles (7 & 7 is, and I'm Down) are covers indeed.

Yeah, I think I got confused with 'Arrangement' and 'Song writing'; they obviously donated their arrangement of 'Indian Giver' to the Pirates, and didn't actually write it.
The Roxy Bears were not these Bears by the way.