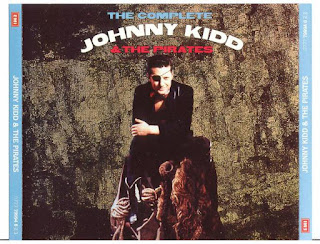 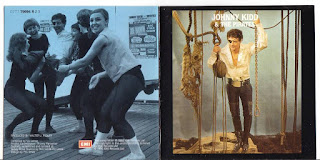 Original Rock'n'Roll, sometimes called Classic Rock'n'Roll, UK style, was generally absolute shite!....but, there were two or three absolute classic tunes, that rivaled the very best stuff that came out of america before their soul crushing system destroyed it all by 1958.
Just as it was left to France to save Jazz, it was left to the UK to save Rock'n'Roll, and in fact re-invent it (That should read,'In fact Invent it!') into the modern form that is still with us today.Although in the original template, UK rockers produced very little of the classic repertoire, we know and ,sort of, love today.
Of these classic tunes, we got Cliff's "Move It", Vince Taylor's "Brand New Cadillac", and two from Johnny Kidd, "Please Don't Touch" and "Shakin' All Over".....all fucking fantastic primal toonage from the R'n'R gene, or jean, pool.
Why is this stuff on this blog?Which is primarily about DIY music from the 70's and 80's, you may ask?
Well, Johnny Kidds backing band were the Pirates, who became prime influences and movers in the burgeoning Pub Rock scene in the UK, which, in turn, was a form of Live DIY, and a very influential catalyst for the Punk Rock revolution, which was the primary influence for the DIY explosion....if one could call it an 'explosion'?
They deserve to be here anyway for the sheer brilliance of those two timeless classics!

I did mention a funny story about the recording of "Shakin' All Over" earlier in this thread, so I'd better recount it hadn't I?

In my early days in France, after moving here from the UK, I met a bizarre looking gentleman, who described himself as a "Bass Player". Called Tony Bell.He sported a jelly-fish style array of straggly ginger tendrils of hair, dangling from the edges of a strategically donned Baseball Cap; beneath which I suspected was a landing strip of pasty, hairless scalp.Luring in victims for his insatiable appetite of relaying endless tales of Showbiz hi-jinks.
Also he had a top lip which was burdened with a ginger handlebar moustache atop a set of goofy teeth that resembled some kind of forgotten graveyard!If that wasn't enough, he sported a pair of pale blue eyes that seemed to point in diametrically opposite directions; not unlike Marty Feldman, as Igor in Mel Brooks' "Young Frankenstein".
He was very keen to recount his experiences in the early UK Rock'n'Roll scene, down at the "2i's" coffee bar in Soho, London; The birthplace of British rock, where Cliff and the Shadows hung out,among others.
He reeled off a list of all the famous rockers he played with back in the day and beyond; Like Tommy Steele in Vegas, Screaming Lord Sutch,Joe Meek(the supreme Daddy of DIY),the legendary Big Jim Sullivan, but never mentioned Johnny Kidd, disappointingly.
Suitably impressed, we invited him,his disciple,and Missus (Irene), round our house for dinner.
Thinking they would probably like to hear some music from the early days of Rock, I made a playlist that included Johnny Kidd's "Shakin' All Over".
So, as soon as that played, they looked at each other and giggled; then said....."Ah, this always gets played whenever i'm around someone's gaff(He-He-He)", said Tony.
"Oh yes? And why do you say that" I inquired.
"Well, I played Bass on this. The bass player couldn't handle the part so EMI got me in as a session man....never got a credit though."
Well, the gullible twat that I am, was gushingly impressed enough to want to hear more of his monotonous showbiz monologues.He'd had so much cocaine in Vegas with Tommy Steele's band that a cavity had formed in his skull, and green pus oozed out a hole in the side of his nose, between those Feldman-esque lazy eyes of his.
He did have a high tolerance of drugs, because he brought his own weed, and shared it with my, then Missus, who left me(good by the way!), and is now with some other dodgy 'bass player' from the incredibly clueless and awful Gaye Bykers On Acid!...what is it with Bass players? Y'know.... those geezers who hang around with musicians?.
Anyway, i digress,and i'm definitely NOT 'bitter', (Get out of Jail FREE card springs to mind); but, It was such hyper strong skunk, that, she passed out, started a mini-fit and pissed herself....and I don't mean from laughing....she actually pissed herself as she lay prostate on the couch. She seemed Dead, and i had a hard job finding out if she was actually breathing!....While I did this i reassured my guests by saying, "Carry on eating,I'm just checking to see if she's not actually dead!"
They didn't seem at all phased by this,and more to the point actually carried on eating(?),which seemed to confirm that they had witnessed events like this before in a previous transient Rock'n'Roll lifestyle.
After my former co-habitee,Justine, had recovered, we waved bye bye, and returned to the house.
I'm not actually as gullible as I earlier suggested, and went straight to work on the internet to discover the truth about this extremely sceptical claim.
Quickly I found the e-mail address of the God-like Johnny Spence, bass player with the pirates, who didn't play on "Shakin' All Over", but knew the original Bass Player, Brian Gregg. He informed me that the Brian was more than capable of playing the bass parts, but if my friend(Tony) felt good saying this untruth then he saw no reason why anyone should burst his bubble. I was not disappointed with this response from one of my favourite musicians ever(if only for that angry face!)....what a great non-star attitude eh? Now that's Rock'n'Roll.....(said in a funny Paul Daniels style voice).
I never did confront Tony with this info, whats the point in humiliating such a character,just because he lied to impress people to alleviate his self-esteem problem ...mostly to girls I think. How else was he going to pull looking like some kind of freaky ginger Preying Mantis?
You can read the original Johnny Kidd Bassist's account of the recording session by clicking here if you so desire.
And if you ever visit Abbey Road Studio's, don't say, "Wow!Is this where The Beatles recorded, say "Wow! Is this where Johnny Kidd and the Pirates recorded?"....because they did.

PS....for Mick Green fans(and if you aren't, why the fuck not????), check out part two of the download, to experience the classic Wilko/Greeno rhythm/Lead telecaster guitar style that we know and love on so many Dr. Feelgood and Pirates mark 2(76-82) recordings. These people were the Beatles for me.

Afraid this two-parter may be just too much overload for me, but I love the bass player story and Mr. Spence's regular guy reaction to it. I guess in the revery of your story you'd run out of time to quip on the record company's select photo of Mr. Kidd being assailed by a band of...variety show dancers.

I don't blame you...there's some terrible stuff on this double CD, in between the classics. The record company always had an eye on the cabaret circuit in those days, so it doesn't Shake all over.
I should add a picture of Tony Bell, i have some of him in action,with bass somewhere on my hard drive.
I notice that Johnny Kidd bares a slight resemblance to a young Robert de Niro from certain angles.

I'm not getting De Niro. But what I am getting is an impressionable young Adam Ant going, "Aha...".

Ah don't forget in your early brit Rock N Roll Mr. Vince Taylor and his Playboys. But yes the tedious tales of rock excess and/or "I was there when this was recorded". Low points being one very long evening listening to a guy whose claim to fame was that he was the tape-op (probably teaboy) when Kung Fu Fighting was recorded. Another was a guy who spent the summer of 79 dining out in Bath and Bristol claiming to be in the Average White Band, turns out he wasn't and when rumbled he quickly moved on to the next suckertown. In both cases you wonder why they had picked such dud acts in the first place. Still the other night I was with some geezer who claimed to be in Storm Bugs for F-sake.

And Part Two seems to be missing track 11, "Right String But The Wrong Yoyo"...

Sorry for being such a jerk!

Hi Philip,
Not forgot Vince Taylor.....i did mention "Brand New Cadillac" in my spiel.
I suppose there are a couple of other classics...mainly from the Joe Meek stable...Heinz, John Leyton, and That bloke who used to be in "Are you being Served?"......no not mr humpries!!!!
Who was it that said they were in Storm Bugs?.....not Steven Ball by any chance was it?...the bloody cheek!

In fact, a gay bloke tried to lure me to his boudoir by announcing that he was Paul Young's road manager.....he couldn't understand why I found this highly amusing.
One has to admit that at Alan McGee's(as DJ) Creation Records night at a club in New York, me and my mate passed ourselves off as two members of The Telescopes to great effect....free drinks, and on a promise until i got too drunk and obnoxious.
I'll have a go at the Average White Band angle one sad day.

Even though I registered on the Box site, I wasn't able to download the missing tracks... Bummer!

Should be no need to register!?....i'll re-up it to google drive.

Hey Jonny, sorry for being such a pain, but Disc 2, track 11, "Right String But The Wrong Yoyo" is still missing...

Paulo X!!!!.....its an awful tune anyway!
I've added an MP3 download to the track listing.
or copy this:
https://drive.google.com/file/d/0B9NKN6kKD8tLbzhTR1dWWVRicEE/view?usp=sharing

That, hopefully should be it!?

Wondering...is somehow all of this madness going to find some connection to and subsequent posting of the late Ian Kilmister's 60's outfit the Rockin' Vickers? (the Vickers spelling being used by the band, not a misspelling on my part). "I Go Ape" is the track that unfortunately springs to mind.

Ian!!!!Am I that easy to read?........just joking....it hadn't crossed my tiny mind....until now!
So, its your fault, Rockin' Vickers it will be.
In fact that can lead us back seamlessly to Pub Rock Proper, with Motorhead's first album which was prime Pub Rock before the spotty leather and demin clad lot grabbed hold of 'em.
So thanks for the idea.