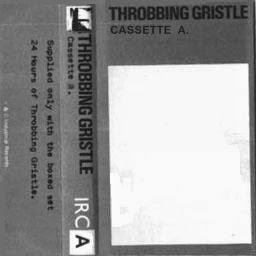 Here's the incredibly rare Throbbing Gristle Interview Tapes,up until now missing from the Die or DIY? TG“24 Hours” box set post. Provided for us by that nice gentleman Mr Shivadescending.
Tape A starts with a John Cooper Clark number (?),dunno about that?then we get Gen talking in his best telephone voice about being misrepresented in the press, and ending up bessie mates(best buddies) with a gutter journalist,interspersed with a few TG hits. Like the records, there's no laughs here,just very serious conceptual explanations, Tangerine Dream liking admissions,and lots of Genesis pronunciating hhhhhis words correctly in that permanently adolescent timbre we all know and love. 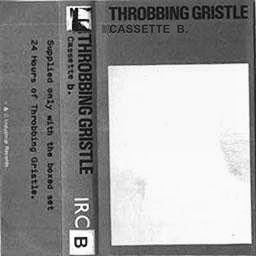 Tape B starts with that computer digital noise one used to hear when your Spectrum ZX was loading Donkey Kong,and later became that Drill'n'Bass stuff that Squarepusher made in the 90's. Then its “United” for the second time in two tapes! Carter talks about how certain sound frequencies can open yer bowels and stuff; a talent perfected earlier by that bloke in Hawkwind, who could target individuals in the audience at will. They go on to liken Muzak to atomic energy, swap anecdotes about our cool mate Billy Burroughs, hear the Velvet Underground do the Wedding Present,quaint predictions of future technology and plenty more explanations.
The thing about the wide rock'n'roll era of popular culture is the need of explanations; and the need for the artist to explain their work rather than understand it, or feel it, for yourselves. Its has the same effect on art as the pocket calculator had on maths. You get the answer, but without the workings and ,more importantly, the effort. A parable for our totally fucked up,lost times. Rule 1, “Don't Explain Yourself To Anyone”, what is life without mystery? Would anybody give a fuck about the JFK assassination if we knew who did it, unexplained phenomena are the greatest art of all,and the most subversive.

Just discovered your blog- wonderful! Thanks for these- also went to ’24 Hours’- thanks again! Sadly, Ubuntu One seems to be down- Mega is fine with me- but 19 still does not work.
Bruno

Hey Brunbo, can you tell me which links are still Ubuntu so i can replace them. Ubuntu ceased business months ago.
I'll re-up IRC19 to google drive.

I mean Bruno of course!

Been a long time TG fan, but never heard a big lot of interviews. Looking forward to this after the kids are tucked in for the night.
Many thanks.

Love the downloading from Google Drive. I use it myself for distributing my own music to friends etc. It's a much better system than relying on the likes of Megaupload or the like.
You have full control of what you share with who. Clever puppy.
JV

Wow, I discovered these in your 24 hours post a few days ago already .Been looking for these for years. And they are great and woth the wait !I´ve asked you a few times for these, thank you for finding and sharing them, Jonny
Thank you, best,
M

Cheers JZ, I wasn't aware either of these tapes existed, bit of an embarrassing oversight on my part I think? Hmph!

My pleasure Rooksby.I shouldn't be embarrassed,never thought i'd hear them myself.Had to pitchshift them down to a normal pitch, as G P-O sounded like he was on helium on the original tapes.He may well have been for all I know?
I got another C120 TG radio show thingy coming up,and another short interview too.

Michael, well done for finding them in the 24 post.Thought they were well hidden there! They found me rather than me finding them.

Judas, why no let the kids hear 'em too?
Google Drive ,for now, seems to not give me any hassle....unlike Mediafire. I accidentally uploaded a file with the word Pussy in the title,which was removed and I got a warning strike against my name for it!? No shit like that at google....so far?

Thanks Jonny-
None of the links for '24 Hours' were Ubuntu- they were all Mega, and as I said, worked for me, except for 19.
Bruno

FINALLY!!!
I Don't know why this was not put into the 24 Hours CD Box that i bought for 200 euros when it was released.
So that is what we need the blogoshere for-Thanks very much!

WoW!
Thanks for posting these fine rarities!

An d the Rare Cabaret Voltaire stuff too! Especially Cool!

It is my duty Mr Exeter.

Yeah, I hate those blogs who just put a record up and that’s it.....boring. Also there is the option of not reading the commentary.And you're correct I am not here to be liked,just like you.

What you've just said in that comment, rather. Though unlike you, obviously, I have a fried browser rather than synapses to blame.

Dear Anonymous(another one shit scared to give a name to the bullshit), can you even speak English,'cus you definitely can't fucking write it! Now go away and take your blog envy with you back into your sad do nothing life.

Fark! With these industrial obscurities you are spoiling us Mr Jonny. I've been trying to find this for years.

Does anyone know who the interviewer on IRC A is??