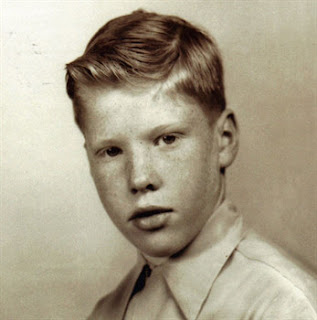 I warned you.....here's another eight and a half hours of the Corwood Representative banging out random notes like the infinate monkey of the keyboard trying to randomly rewrite Chopins' Nocturnes.Playing all the right notes, but not necessarily in the right order.
Just imagine an infinite number of Jandeks banging out the classics......its just that i think we may need more Jandeks than infinity allows for the master of the very wrong note to hammer out anything by Chopin......ah well, each to his own eh?
I'd like to see the psychological profile of someone who listens to all of this straight, in one go, and in sequence.
I did attempt to listen to the Stooges "Complete Funhouse Sessions" once in one go,but by the 12th take of 'Dirt' i was eating the walls.I nearly made it through Miles Davis' "On The Corner Sessions",mainly because it rarely repeated itself,rather like Jandeks Ivory tinkling? So it is possible,but I fear for your mind.

Thank you very much for this, and for all you do!

I'm afraid I did listen the all of last week's offering at once, straight through. For the first time I percieved a real affinity with the Corwood representative, beyond what's come to be expected, what people are either intrigued or reviled by. I really liked his unfocused piano/keyboard noodling. It was minimalism without the new-age pretention. So I guess this week I'm fine laying on the train track waited for impact from the Jandek express. For obvious reasons, I prefer to keep my pshchologicsl profile private. obsured, tinfoil hat in place.

If you play these together with some of his vocal only/weirdo talky "songs", it's kinda like having a Make Your Own Jandek Record Kit. Just in time for christmas!!

Well done that Pooper.
Thats my xmas presents sorted!
It really does produce some of the best Jandek I've heard to date.....if the man himself is reading this,this is a good idea for a new direction?

I'm worried for you Rev b!

Ah, someome cares! Not to worry, At least I've no plans to kill anyone because it's all 'their fault.' Sadly, blame is a common excuse these days.

I think I'll go for one a day with these too. Better sound than what doesn't kill you makes you sorry (or whatever they say (whoever they are)).

Damn, I like this set even more, I don't have the musical or literary chops to fully explain why I like this stuff so much, save to say it creates a space away from the world that I enjoy. The closest thing I know to compare it to is a John Cage piece called Cheap Imitation. https://www.youtube.com/watch?v=D6ukoi7m2wM&t=35s. Both men are generally known for atonal sounds many would call uninspired noise, and yet they're capable of reflective piano music like this. Who knew? Nothing like having your preconceptions shattered. I guess mixing these two extremes get you to 'normal'???

This one inspired me to try a piano album. https://aboombong.bandcamp.com/album/aphronesis - too slick for your tastes I am sure, but I was proud of it as a skin-banging punk drummer.

Theres still time to be the new Richard Clayderman that the world is screaming out for.

I'm listening actually the number one, and it sounds like Chostakovich Preludes & Fugues.
It's very peaceful.

Thats exactly what I was thinking....but then again I'm Deaf.

I'm going to wake up my family on the christmas morning with this record playing at full volume. I bet it's going to be a marvellous day! Thanks bro!