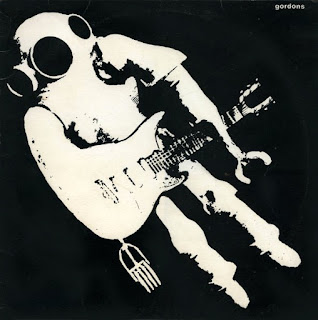 Hmmm a classic example of the 'difficult' second album, up there with The Adverts and The Damned,whose follow up albums destroyed their careers. Whereas, those two records are now thought of as rather good, The Gordons second ,isn't. Mainly because they lost their main man Alister Parker, and replaced him with someone called Pinker, whose singing style stinks of rock orthadoxy,and whose guitar playing was far too considered. This record wanted to be liked, and thats what makes it unlikeable.....this ain't no Adverts 'Cast Of Thousands', this is The Dead Boys', terrible, "We Have Come For Your Children" standard, but without the hits.

DOWNLOAD some volume too HERE!
Posted by Jonny Zchivago at 00:08

Interesting to hear this finally... the change of singer and the, erm, interesting production values make it sounds like a completely different band from the first one. Not surprising that it's never been reissued...

Cheers for the opportunity to hear it!

What a load of absolute bollocks- In my opinion the second album and lineup was brilliant and easily as good as the first. It stands up very well to a re-listen. Interestingly enough, according to John Halvorsen, this is the lineup that did the most number of actual gordons gigs. Well worth a re-listen and a re-release. It might just surprise you.

Nah.....this record is awful by basically a different group.....also 'in my opinion',but an opinion shared by many....and i don't like being in the majority,but in this case they are correct.
Scheech!!!!! That singing!

I bought their first album back in 1982....loved it the only song that I like off this album is Lead Room. It's a shame the original band didn't record Lead Room - it could have been as great as Coalminer's Song.