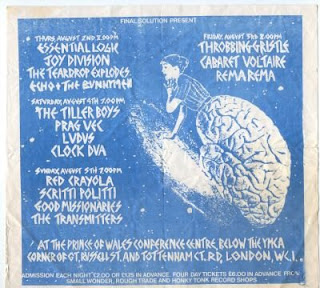 Mmmmm, a rather good line-up at this festival? Joy Division got lumped in on the 'commercial night' with The Teardrop Explodes and Echo and the Bunnymen.
The Throbbing Gristle performance can be found earlier on this blog as part of the "24 Hours Of TG" post.
Rema Rema, Essential Logic, Prag Vec, Clock DVA, Scritti Politti , Good Missionaries, Red Crayola, and Cabaret Voltaire, can all also be found on this blog...just click on their names.

I'll leave it to Adrian Thrills to review the Joy Division performance for me:

"If I had a flair for understatement, I could say that Joy Division were good too. The truth is they were phenomenal - the most physical hard rock group I've seen since Gang Of Four. This Manchester band have been allowed to grow at their own pace, uncramped by commercial pressures. The result is that they've created a totally distinctive, cohesive sound over the last two years...They have the spirit and the feeling." - Adrian Thrills, NME review 11th August 1979.

Interesting use of the term 'Hard Rock', which I don't think is too inappropriate.I can imagine most of JD's tunes could easily be metalized by any of these modern day Doom Metal groups;unlike The Gang Of Four's funky canon,which was responsible for motivating such horrors as he red Hot Chilli Wankers?!

HERE are the young men's christian association DOWNLOADS!
Posted by Jonny Zchivago at 11:11