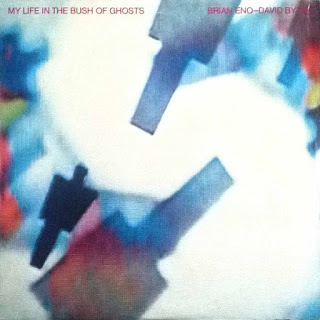 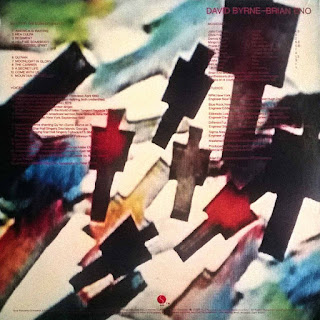 The most famous Eno collaboration was a less subtle Third World rip-off, with trendy(for 1980) Talking Head, David Byrne. Here he leaves the Herky Jerky college boy funk behind a tad, to indulge Eno in his misappropriation of Holger Czukay's ethnological forgery techniques from the late sixties.
Again he manages to avoid the patronizing qualities of most western 'world' music atrocities, and creates something rather reflective of the culture clash between the technological landfill site that is the so-called 'west' and the poverty stricken financial hostages of the third world.A bit like what Philip Glass and Godfrey Reggio achieved in the movie "Koyaanisquatsi" around the same time.....there was a lot of it about in the early eighties apparently!?
I don't like to use the word 'samples' before sampling, but this is a case of using 'Found Dialogue' rather than syncing in digital recreations of field recordings of Algerian muslims, lunatic preachers, and traditional african singing.
The track "Qu'Ran" was withdrawn from the cd version due to complaints from.....you guessed it.....muslims. Which is strange because its not normally very easy to offend a Muslim now is it?
They only whip out the odd death threat every now and again, if someone writes a book,or accidentally samples an Islamic prayer and puts it on a pop record. Ahhhh, bless 'em.
But us here on Die or DIY? aren't so easily offended, and therefore it's back in, and all you fun lovin' muslims out there, get your women's faces out and lets move to some rich intellectual pop stars version of Ambient tribal funk music.
The record that launched a thousand Muslimgauze albums.

DOWNLOAD these satanic verses HERE!
Posted by Jonny Zchivago at 01:36

thank you...that last track was nowhere to be found...

There is an expanded 25th anniversary edition from 2006 with many extra tracks!
You can listen to "Qu'Ran" https://youtu.be/erRuO59rEVc