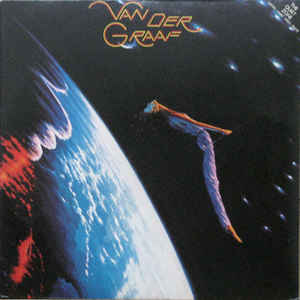 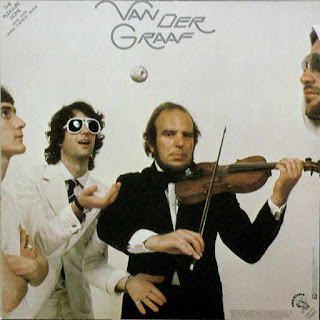 Another Prog combo who had a large influence on the Post-Punk era were dark-proggers Van Der Graaf Generator. Having been name-checked by Johnny Rotten on his shockingly 'hippie' stained Capital radio Show with Tommy Vance in 1977, "Johnny Rotten,The Punk and His Music', were imeadiately labeled as acceptable by the more intelligent 'punks'; as was Peter Hammill, of whom Lydon admitted to Vance that...' (he) stole a lot from dat geezer,yeah'.
Possibly, some of the Lyrical ideas were appropriated for 'Metal Box', but beyond that I can't see anything else in common; especially not in his terrible lyrics for the Sex Pistols .
That radio show was a key moment for the next wave to move away from the tired Ramones format with shouty tunes about dole queues and boredom.
Arguably the earliest 'punk' to jump ship was Howard Devoto, who basically formed a more sneery version of Van Der Graaf Generator, called Magazine, who were prog in drainpipes with short haircuts.
Always open to moving forward, Van Der Graaf Generator, unlike most of Prog's leading lights, chose to absorb the message from the 'Punk' phenomenon, and made a more straight forward record in 1977. Shorter songs, no long suites, less showing off, and they shortened their name to just 'Van der Graaf'.
This album is still undoubtedly a 'Prog' record in its concept, but also an attempt to distance themselves from the previous musical epoch of wizards, symphony orchestras, and classical pretensions. This could easily have been a 'Magazine' album if Devoto was the singer,and Hammill could have comfortably slotted in on Magazine's "Real Life"........even if his vocal style does remind one of some singer in a bad rock opera like 'Godspell'......I suppose VDGG did do their own answer to that particular atrocity with the excellent "Godbluff" album back in '75.

It was Hammill's album Nadir's Big Chance that allegedly turned young Lydon's head. It was initially planned as a VdGG reunion album of sorts - I guess they disbanded briefly - but for some obscure reason was released as a Peter Hammill solo record. It really is a sort of glimpse of Punk rock to come. It remains one of my all time favorite albums.

Just to say... nice one Mr Z. Always a pleasure.

VdGG and Hammill's work have certainly aged better than most working in the genre.

I can see that i'm gonna have to post Rotten 'The Punk and His Music' radio show....its a good listen for the adverts more than anything else....especially the bit when lydon says...."yeah....I love my Music",trying his best to still sound dangerous but falling into nerdsville....like the rest of us.At least he admitted to liking Gary Glitter, don't confuse the man with the music,it was a work of genius.
VDGG rule.

Hear, here (or is that hear, hear). Cheers Jonny. One VDGG LP I don't have, officially or otherwise. ta.