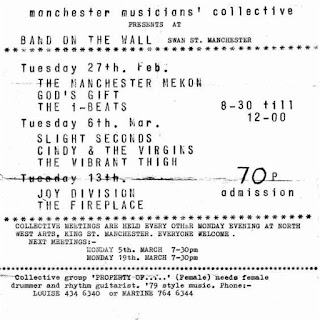 By 1979,as I have nothing from 1978, Joy Division were fully formed. This is the earliest evidence I have of that,hidden within the static. It's a very ropy recording from one of the Manchester Musicians' Collective nights at The Band on the Wall pub.
They stood out like a sore thumb alongside the other DIY bands,that played on these evenings,many of which are featured earlier on this blog .Joy Division were a unique and powerful unit,who played with a rare intensity and focus that was generally lacking among their peers.
Even on this atrocious recording one can detect that something rare and special was brewing.

DOWNLOAD some early Joy HERE!
Posted by Jonny Zchivago at 10:22