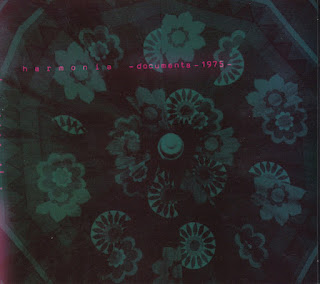 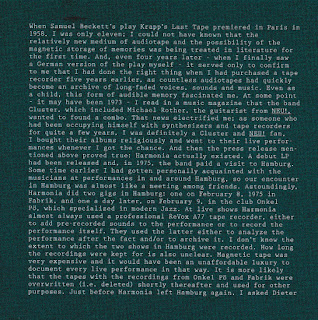 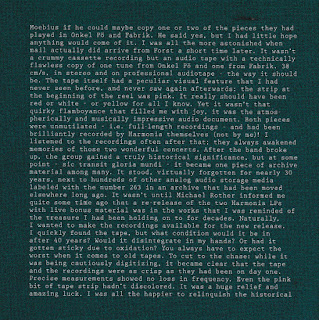 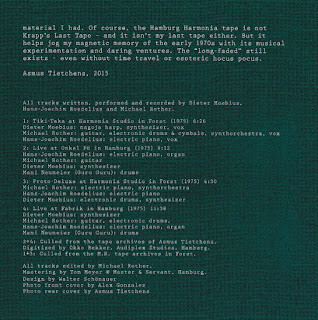 Long lost and forgotten recordings of Harmonia in actionin 1975,as archived by Berlin School electronicist Asmus Tietchens, who provides the liner notes.
He mentions, Beckett's play "Krapps Last Tape", which is appropriate, not as a reference to using recorded sound as memories, but as a testament, or a document, to the fact that this tape isn't Krap, with one 'P'. In fact its some of the best Harmonia on record,and some thanks for this goes to Mani Neumeier(drums)of Guru Guru who adds some much needed looseness to the proceedings, and therefore,strays somewhat from basic 'Motorik' principles.
As always with Moebius and Roedelius, some of the keyboard sounds remind one of the presets on a Casiotone, as a juxtaposition between muzak and the avant-garde; always an interesting place to inhabit.

DOWNLOAD harmoniously from 1975 HERE!
Posted by Jonny Zchivago at 10:33

I haven’t come across this one yet, but obviously I’m interested and thank you for the introduction. As cheesy as they can sound, I’ve always been drawn to Casio keyboards. I used to play them in a band named Anne Such which played live only in my basement. I think it has less to do with what equipment is used than HOW it is used.

German band Trio made good use of the Casio keyboards.- Grego, Australia.

Asmus Tietchens, throughout his vast and VARIED catalog of works, has never shown any affinity for the Berlin school sound. He should NEVER be lumped in with the so-called "Berlin School" sound. Possibly rare exception might be the recording 'Zwingburgen Des Hedonismus,' a single sided LP long form work released in 1987 by Multimood Records, Sweden.

Absolute gem of a recording, a must have for fans of Harmonia and
German electronic music. Immer Wieder is stunningly mind blowing
on this record. Many thanx to DIE/DIY.

Cheers, cheers, cheers! I know you're a bit sceptical of this lot, but I rate them. Thx. W