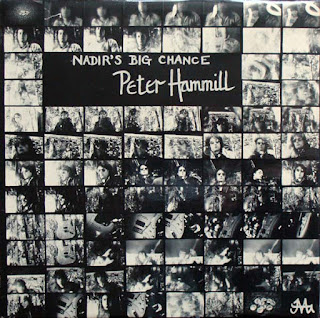 1975 is often cited as the Nadir of popular music,but it contained quite a few overlooked influential classics.An often cited influence on the punk rock explosion is Hammill's "Nadir's Big Chance" album.For its anger, short aggressive tunes, and lack of showy musicianship. Also as John Lydon played a track from it on his infamous Capital radio show. That says less about this record than it does about Mr. Rotten's musical roots. He liked Folk,Prog,and Captain Beefheart, much more to do with the music after punk than during. Which explains the music he got involved with immediately after the Pistols, who really were the 'Last' rock band...time to move on.
This is one of Peter Hammills top three albums in my opinion, alonside "Over", and "The Silent Cornser and the Empty Stage".......again he's back by his old mates from Van Der Graaf Generator, so it can sound at times like a basic version of his more celebrated group persona rather than a purely 'solo' record.

On the Capitol Radio show, I think Lydon was saying that _David Bowie_ stole a lot off "dat geezer." Makes more sense. I guess. Chronologically it's a little suspect, but still possible I suppose.

Hi Johnny, longtime dl'er, first time commentator. First off, love the blog! One of the few consistently interesting mp3 blogs I've perused. I really appreciate yr ability to switch genres,yr nowhere near as single minded in yr posts as most, and simultaneously their is a definite aesthetic at play. Memo to myself:(Aesthetics at Play.,good blog name). BTW another lp by Mr Hammill you may enjoy is called "A Black Box". Definitely has a post-punk vibe incl. some very cool noise textures. And one more heads up there is a fantastic, period (1973?) clip of VDGG playing the epic " A Plague of Lighthouse Keepers " on YouTube. Highly Recommended if you haven't seen it yet. That drummer of theirs was a motherfucker. Thanks for everything.

Parmalee...you are probably correct.....you can all check out my error when I post said radio broadcast, up next.

Joel Rizzo,i have to subtly switch genres every now and again to avoid boredom....but...in true 'prog' style everything is linked dubiously with the previous post or posts.A concept blog if you will?...i have from time to time even posted records I don't like to keep the concept going.
Yes seen the plague of lighthouse keepers.....on german TV i think. What a group?

Parmalee - the chronology factor regarding Peter Hammill's effect on John Lydon is well taken but Van Der Graaf Generator did debut a good ten years before the Pistol's album. Might JL have noticed? Who knows? Probably not until later but Nadir's Big Chance appears to have affected him as did the Marquee gigs captured on Vital. I love that album for the reason fans of earlier VDGG do not- it's raw brutal piss take on the so called legacy of Prog. The only other participants I can see making this break at the time were Robert Fripp and Peter Gabriel. Few seem to mention this. It's as if they saw the approach going wrong and had to remove themselves. Fripp said as much to Joe Strummer-"The movement I was part of went wrong." For his part,Hammill thought the punks might have responded favorably to the absence of fairies and elves in their lyrics! Forgive the length and thanks for your presence here!

Dale -- I always get a kick out of how so many "prog purist" sorts intensely _loathe_ Vital. Even without Nic Potter's monster bass, that record would still be a treasure. Of course, _with_ Potter's bass... just imagine every record with a brutal bass sound--Magma with Jannick Top, only Top's bass sounds like _that_. I think the world would be an immensely better place.

There were others, besides Hammill, Fripp and Gabriel, but mostly lesser knowns. But the ones who _didn't_ adapt or embrace any sort of changes have always held a curious intellectual fascination for me. I've no problems with virtuosity and the like, but seeing such as the end all? Just such a weird hill to die on.