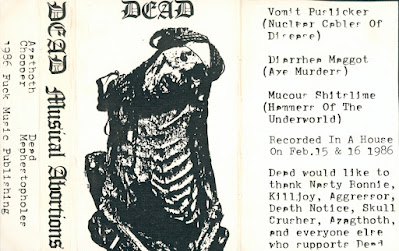 If Dead were called, THE, Dead, one would automatically think that they were some uninspiring punky group just making up the numbers.But, AS just simply...."DEAD", that makes all the difference.These Floridian reprobates were obviously going to be interesting.I digress but,Strangely enough 'Dead' was also assumed name of the vocalist in Norwegian Black Metallers Mayhem,who killed himself in the name of art.
However,In their desperation to categorize Dead's bizarre mash-up, most dull as fuck music commentators have graded this as "Death Metal",which evidently means the singer does that growly thing over a load of sped up major chords. One understands that Dead had a career after this demo tape,of which I am pleasantly unaware,but my experience of how most embryonic pop groups turn to shit in pursuit of 'a Career', i have little curiosity to how they turned out.It wouldn't surprise me to find out that they actually are now a standard predictable Death Metal group of half way up the List at Hell Fest level of fame.
Metal is normally a by-word for Shit,but the reinterpretation of the adjective 'Metal' by Dead in 1986,is a wonderful impression of blown speakers wired up to an overloaded amp in a rotating concrete mixer full of rock and metal....as in Rock and Metal the elements as raped from the earth by humans to make amplifiers and speakers for hopeless young men like "Dead" to blow up.
The quality of these recordings lie somewhere between just plain shit and luminous raw sewage from Fukushima piped into your suffering brain.Like being rendered deaf by an oncoming train of impenetrable radioactive smog.
The tape ends,like any worthwhile anti-social behaviour, with a visit from normalsville and law and order officials threatening Jail if they don't stop.And in true Death Metal style, they stopped.
Tracklist:

I thought you were gone.

Anyway - you and some of the people here kinda hate VOD right? Well, stick it to them by taking all of their shit from here :

I was gone but i'm back...it was all just a laugh.
Anyway...Thanks Enid you clever young girl.That'll save me from doing it...much appreciated.

You're welcome, Mr. Mellish. The new paperclips have arrived also.

Welcome back and downloads be damned - you're the best rock'n'roll writer on the internet.

tHANX kZKA...THIS CERTAINLY AIN'T NO jOHN rOBB'S 'lOUDER tHAN wAR' arse licking sycophants dream on here. Modern music writing seems to have nothing but praise for everything.It's all Great innit?.....when in reality very few of it is anywhere near praiseworthy not to mention the people behind the music. No one wants to hear it. I feel its my duty to weed out the crap in everything that isn't.