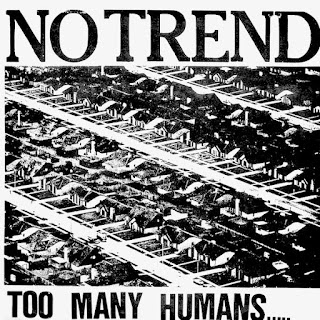 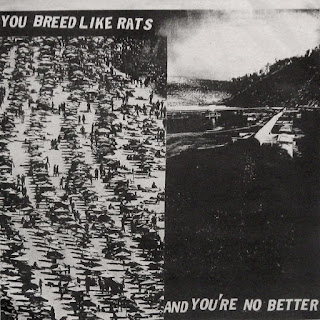 One of the best albums ever made is my humble assessment of this misanthropic ,environmentally aware dissection of our self-made prison. Well its in my top ten anyway...whether you like it as much or not at all, in classic No Trend style I'll say go and kill yourself then think again.
If one complains that there's too many humans on this overcrowded,and incidentally, very isolated spinning Rock (No Planet B reference), then you're accused of being part of the grand conspiracy,headed by Bill Gates.
"They are trying To Kill Us All" cry the internet informed paranoiac.
Simply, like the No Trend lyricist, Gates is just stating the bleeding obvious...THERE ARE TOO MANY HUMANS!...duh. All it will take to finish us all off is for every Chinese person, and there are a billion of the fuckers,to buy a Fridge then we are way beyond the tipping point,and there is NO going back. The result of which is complete and utter annihilation;but as capitalism doesn't have a reverse gear,we're fucked.
And I'm No better.....i got a fridge, i run a diesel car, I'm a part time vegetarian,but i don't buy stuff, except second hand records of course,and i recycle, even though I know it's all shipped to a holding facility in Hong Kong before it goes to landfill in Mongolia;it's actually more carbon friendly to not recycle....but it makes me feel like i'm doing something to help. Then when i'm starving to death in ten years time,i can die without too much guilt.
Global CO2 emissions went up by 16% this year by the way....and we are supposed to be doing something about it!? Let's face it, we breed like rats, but rats will inherit the earth, mainly because they live within their means and don't need all that plastic crap we salivate over....like over priced vinyl for example.
Tracklist:

Side No
A1 Family Style
A2 Blow Dry
A3 Reality Breakdown
A4 Kiss Ass To Your Peer Group
A5 Fashion Tips For The 80's
A6 Do As You're Told
Side Trend
B1 Too Many Humans
B2 For The Fun Of It All
B3 Mindless Little Insects
B4 Happiness Is ...
DOWNLOAD too many records HERE!
Posted by Jonny Zchivago at 09:18

Overpriced vinyl is something to cheer about, though! The more records become gourmet shit, with the little man forced to slurp from the trough of SPottythigh, Youtube etc., the lower the old CO2 footprint. And you're quids in if you've hoarded much of the stuff.

(bell rings)'Jenkins, has my copy of Exploited Live On STage arrived yet? OH GOOD. Bring it in along with my quail's egg, would you?

What's that? The quail has gone extinct, you say? Pity. Better order in a brace of zebra testicles. '

Jenkins boss sounds a lot like me...always a vinyl delivery in the offing,and i eat a lot of game as my step-son is a much disapproved of hunter...so Boar, Pheasant, deer, is a regular in the Zchivago household....no Zebra's Balls however.

It's important to live within your means.
Even if you have to borrow to do it.

Getting into deep debt was well within my means.Having lost thousands during the dot-com boom, i maxed out my credit cards,changed my ID and emigrated....always a winner that one.

This early No Trend stuff is sooooooooo good. It was actually released by Drag City in a sumptuous box set (!) last year, along with some great live recordings. An essential purchase!